Ryders Rallies but fall to Tigers in Overtime 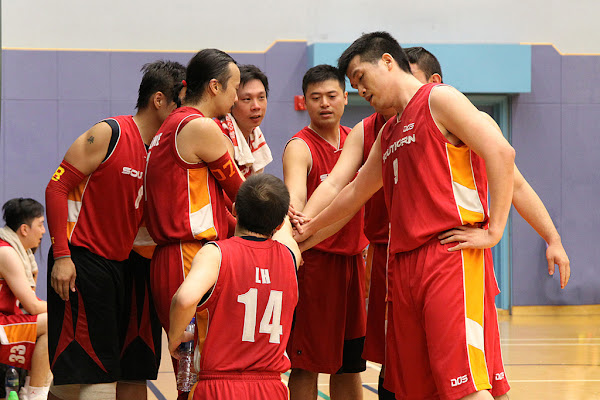 Ryders rallied from a ten-point deficit late in third period and even with a chance to win but missing free throws in the final seconds put the game to overtime, when Tigers survived this game and advanced to the second round for only the first time since 2007.

With the game tied at 44-all and only seconds left to play, Julian Wong (RYD #69), who scored all his six points in the game by making six of eight free throws, was fouled and sent to the free-throw line again. But Julian just couldn’t made one more to win the game and the first game of play-offs this season needed five more minutes to determine a winner.

Benny Wong (SOU #7) scored two points to start the extra period, and passed the ball in the team’s next possession to Mike Mak (SOU #5) for two fast-break points that gave Tigers a four-point cushion.

Poon Yee Lap (RYD #17) split a pair of free throw that cut the deficit to only three points.
Benny lost the ball and was called for a foul after chasing it that put Sin Ka Kei (RYD #4) to the line but again the Ryder could not capitalize any of the two foul shots and a five-point distance was maintained.

Wilson Chow (SOU #9) received a bounce pass under the basket and scored two points that re-gain a five-point lead with about a minute to play in overtime.

Sin made his only attempt from the three-point zone and made the basket that cut the deficit to only 48-50. He made one more free throw to turn it an one-point game but Benny grabbed the in-bound pass and made one of the two ensuing free throws after being fouled. A desperate mid-court shot in the last second by Ryders did not hit the rim as Tigers survived.

Chow Chi Wing (#21) made his only basket by putting back an offensive rebound in the third period which was followed by a three-point shot by Wilson and Mike and Terence Chan (SOU #10) each made a basket to complete a 9-to-nothing run which gave Tigers a 10-point cushion, the biggest margin in this game.

Tigers struggled to score from then, and Ryders’ rally began.

Lee Chang Wan (Ricky, RYD #26) scored two points before the end of the third period,  Sin’s two foul shots was sandwiched by two baskets from Lawrence Ku (RYD #3) and this 8-0 run reduce the difference to two in the middle of final stanza.

Benny’s third three-point shot from top finally broke the Tigers’ scoring drought and re-gain a 40-35 lead. But the Tigers again struggled to find another basket while Ryders continued to climb back.

Ricky’s basket put Ryders up 41-40 with more than two minutes left, the first lead since the middle in the second period. Mike and Poon exchanged baskets, and the leads, for their corresponding teams and a free throw from Julian gave Ryders a 44-42 lead before Mike tied it again at 44-all.

Mike scored a game-high 16 points for Tigers. Bernard Sin scored a team-high 15 points and averaged 10.7 points and seven rebounds, both team-highs, for Ryders in seven games.

SOUTHORN Tigers was sent to the line only once, when Benny was fouled to stop the clock in OT. Ryders missed 14 of their 26 attempts at the charity stripe, was 2-for-8 in overtime.

The Tigers will face Photons in next round on May 20 at Smithfield Sports Centre.