Eric Lifts SAM Past GTE With “My Time” 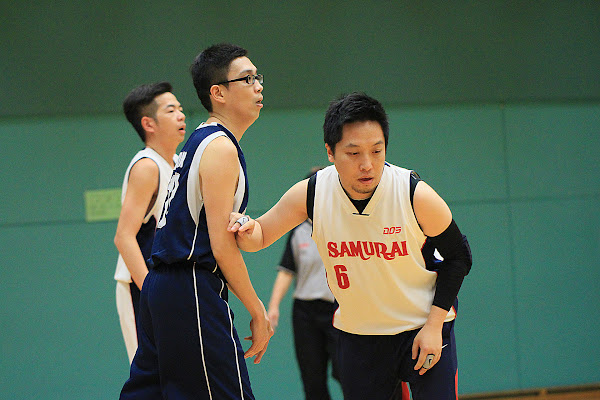 Eric Leung (SAM #6) did not score 17 points or make five treys again, but his running layup put SAMURAI up by two points late in the 4th period, a lead he and teammates sustained and beat Explorers 33-29 in the second game of the Original Four series.

Kit Cheng (GTE #86) had an monster game for G.T. Explorers, who was in a second straight game with more players than the opponent. The Explorers forward scored a game-high 18 points and grabbed 15 rebounds to complete a double-double before foul out in the final minutes.

Mark Au (SAM #34) might be the best SAMURAI on the floor this evening, who scored a team-high 12 points along with eight boards. Kelvin Ng (SAM #10) had eight turnovers, but he split two pairs of free throws in the final seconds which sealed the win, keeping SOUTHORN Tigers from an early declaration of O4 winner this year.

After a 6-0 spurt that started the game, SAMURAI was cooled down in the first period, which ended with a 4-to-nothing run by G.T. Explorers (or by Kit himself) as the close game began at the start of second period.

Three ties and one lead change conclude most of the second period, in addition to turnovers and missed shots from both teams. SAMURAI had only eight field goal attempts in that span, when they also turned the ball over five times. Meanwhile, the Explorers were a combined of 3-for-12 shooting. Neither team could give their opponent too much damage.

One basket and free throw apiece from Kit sandwiched a three-pointer from Kim Chau (GTE #40) which capped a 6-0 run for a four-point lead for the Explorers.

Eric hit his first field goal, a three-point basket in the third period to cut the deficit to 16-17, only answered by another long-time player in Bryant Chan (GTE #8), who hit his own to re-take the four-point cushion before Kim’s basket extended it to six, the biggest margin by the blue team in the evening.

Patrick Lai (SAM #15) scored the teams’ first basket but was quiet since then, especially with a third foul only early in the second period. Patrick, however, kept SAMURAI in the game. The left-hander scored the team’s final five points of the third period, while SAMURAI was still behind 21-24.

It was Mark’s turn to step up for SAMURAI in the final period, while dueling Kit, who continued to be the threat from Explorers. Mark scored all the first four SAMURAI baskets, including one taking a 29-28 lead in the middle of the period.

“My time”, said Eric, after Patrick Lai got his 5th foul and returning to the bench. The first shot after this moment was a missed three-point shot, which turns the cheers from court side to boos.

The cheers surely would come again.

With the game still tying at 29-all, Eric drove past through defenders from the left wing, his running layup swished through the net and took back a lead for SAMURAI.

Bryant had the chance later to tie the game but he missed both free throws while SAMURAI re-gain possession.

Two un-sportsman-like fouls were called in this game. Mark was called for excessive reactions after he sent Kit to the ground. Kit got his fifth foul for getting his opponent from behind in the final period.

Down by three, Explorers needed an intentional foul to stop the clock in the final seconds. Kelvin Ng dribbled the ball across the court when Kelvin Lui (GTE #13) tried to grab him but withdrawn in his first try, he got Ng in his second while nearly sent the smaller Kelvin to the ground, Lui grabbed Ng’s jersey with both hands, moved Ng in a half-circle spin before helping him to land carefully. Kelvin Ng split the final pair of free throws for a four-point lead which sealed the game.