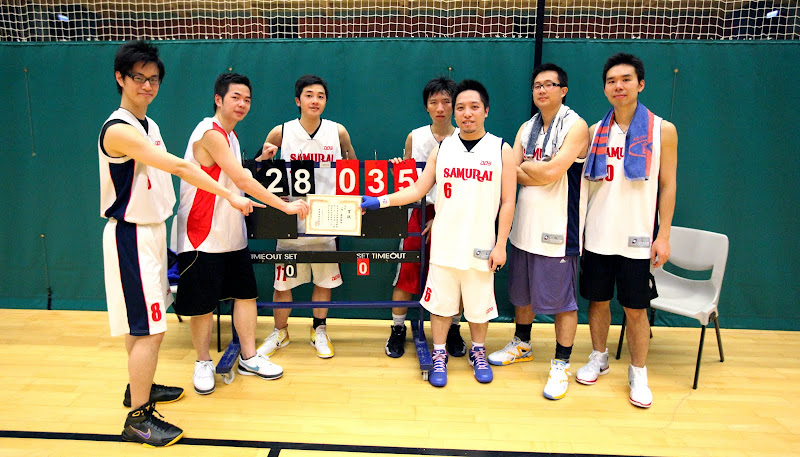 SAMURAI beat G.T. Explorers 35:28 in the final game for Original Four 2009 and repeat as winner.

SOUTHORN Tigers failed to comeback as M.I.B. avenged the loss last year in a 35:31 victory. Terence Cheung, another old-time Raimondian who appeared recently, helped Tigers to tie the game at 29-all but a couple of turnovers down the stretch failed them for the chance to take a lead. The game clock ended right after Jefferson stole the final inbound pass and hit the final two points of the match-up.

After M.I.B. revenged in this O4 series, G.T. Explorers kept their fate similar to previous time.

SAMURAI could not get away until the final period. Michael Chan scored 11 points and Chung Sing player Sin Lok Ming added eight points despite only 3-for-12 shooting from the floor. Van Law was the lone bright spot for the Explorers this game, with a single point shy to a double-double, scoring 9 points and grabbed 10 boards. Kit Cheng added six points and was the only help in the final period.

M.I.B. will become Spirit in the next S.B.L. season while the formation of the team members will change a bit despite still having Gilbert Fu, Jefferson Tong and some other core members. Adrian Chou will take a break from being the men in black and join Tigers next season, and will have a re-union with Ben Cheng, another former M.I.B. now on the Tigers team.

While Chi Chiu Au departed from SAMURAI, the 2-time O4 winner will have Patrick Lai back for the coming S.B.L. season. SAMURAI, G.T. Explorers and Spirit is going to play in the same division while they will only have chance to meet SOUTHORN Tigers should they match up during playoffs.