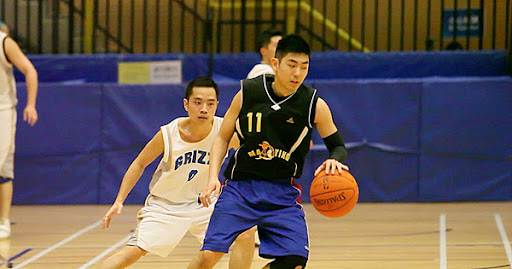 MA YING is the new team this season, and they now have the chance to become a new champion too. Winning in a 45-35 match-up against GRIZZ, MA YING will face Trojans in Final on June 13 at Shek Tong Tsui Sports Centre.

Starting with a three-point play in just the first possession of the game, Otto Chan was red-hot right from game start. He made his second attempt from the field and concluded a 13-0 run, even in a span Chung Ming Mok, the league’s leading scorer, had not yet a single point.

Ka Wai Fu hit the team’s second basket from beyond the arc when the game was 5-15, just before Otto Chan started another run for MA YING.

Chung Ming Mok scored his first two points from the line near the end of the period when MA YING was up 21-5. Kit Sam Tso’s basket finished the first period 7-21.

Only scoring seven points, MA YING cooled down in the second period. GRIZZ was even worse with only two points from one single field goal.

After the break, GRIZZ looked to re-gain some scoring touch. Ka Wai Fu, Leo Chow, Tony Chow and Raymond Pak each scored two points in a 8-0 spurt which helped to cut the deficit to 13 points mid-way through the third period. But Danny Ho and Chung Ming Mok put it back to 36-19 with two points apiece.

Despite getting some offensive boards, GRIZZ could not convert them into second chance points late in the period. Ka Wai Fu hit two foul shots and dished to Ho Yin Chan’s basket for a mini 4-0 run but GRIZZ was still down 23-37 with only ten minutes left in the game.

Otto made two more free throws in the 4th period and put MA YING to 41-25, before GRIZZ’s rally that cut the game to as close as six points.

Down 16 points, with the help of missing field goals from MA YING and four missed free throws from Chung Ming Mok, Leo Chow made two three pointers in a 10-0 run which was concluded by a basket from Raymond and GRIZZ was down only 35-41 late in the period.

MA YING did not collapse. Boris made two foul shots and Chung Ming Mok added one and MA YING was up by nine points again with about a minute left in the game. Otto finished the game with one more free throw for his game-high 14 points.

Chung Ming Mok had 10 points despite shooting a 4-for-15 at the charity stripe. Otto was one rebound shy for a double-double with 14 and 9. He made all his first four field goals.

Ka Wai Fu snapped his three-game streak with double-digit scoring with a team-high nine points. He filled the box score with 5 rebounds, three dimes and steals apiece with one blocked shot. Leo added eight points but was only 3-for-13 from the field and missed nine of his eleven tries from three-point range.

Ranked number two, MA YING will re-match with FLIGHT Division-leading Trojans in Final at 17:30 on June 13. Trojans defeat MA YING 46-35 on April 18 when Chung Ming Mok did not play.

Western Park Sports Centre now got plenty of lines. While only the old court lines are implemented, both old and new lines were put on the ground, showing two lines for three-point range.  (New rules are tentatively effective in 2011.)