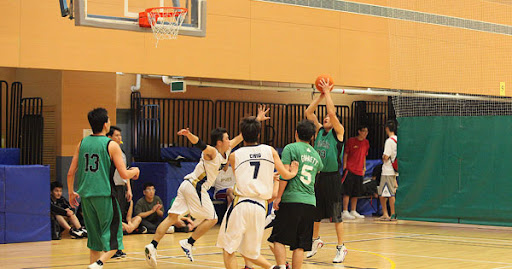 Sunny Wong hit the game winner in the final seconds, took back a one-point lead and give Trojans a chance to become a champion for a second time.

Man Chun Chow’s fast-break point which put Dream Team up 34-33 appears to be the game winning shot for the defending champion.

However it is not.

After the goal, Trojans throw the ball in-bound, Mike Yau dribbled to mid-court and manage to pass it to Jerry Lee. Seeing two defenders matching him near the free-throw line, he passed the ball to Sunny, who was open near the baseline.

With the clock ticking, Sunny caught a pass and took a shot. The ball took a few bounces before getting in and a Dream Team turn-over in the final seconds failed their final hope to win this semi-final game.

Trojans started strong in the game and held the sluggish Dream Team scoreless in the first period. Jerry Lee, including a three-point play, scored all his five points for the game in this period and Trojans lead eight to nothing at the end of the first ten minutes of the game. Dream Team had only four field goals but committed seven turnovers in that span.

Certainly, the defending champion was not done so early. Sze Man Wan’s three-point basket in the middle of second period capped a ten-t0-nothing run which put s team back to a two-point lead and Dream Team led 13-11 entering the half-time break.

Seung Lung Chin scored his first basket of the game early in the third period which helped Dream Team to build a six-point advantage. Siu Lung Cheung either got rebound, scored or assisted to help Trojans stay in the game. Dream Team still up by 4 points before the start of the final stanza.

Tsz Chiu Chim added to free throws which were followed by Man Chun Chow’s three-point shot and Dream Team started quickly in the 4th and extended the lead to 28-21.

And the game was turning to a nail-biter since then.

After a time-out, Trojans managed to rally back. Mike Mak hit a trey after Leslie Cheung and Siu Lung each scored and the 8-0 spurt cut the deficit to only one point before Seung Lung Chin’s free throw that made it 30-28.

Two offensive boards allowed for Trojans, Dream Team called a time-out after they could only foul in Trojans’ third chance to tie the game. Leslie made split the pair of foul shot for 29-30. Despite he missed two free-throws later, he scored the basket with less than two minutes which helped Trojans to take a 33-32 lead and was key to get the rebounds for his team down the stretch.

Man Chun Chow stole the ball from Siu Lung for two fast-break points but just that was not the final basket in this game.

Chow had a game-high 15 points and missed only two of this eight field goals. No other players from Dream Team scored more than six points.

Trojans advance to Final again since the team was champion in the league’s second season.