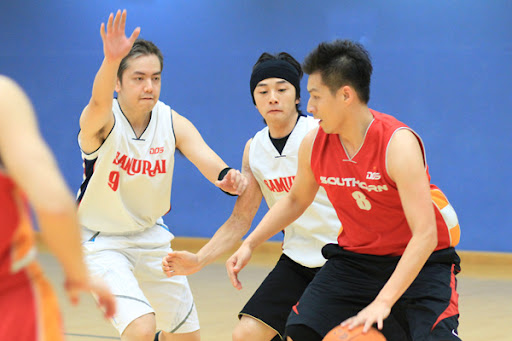 Kelvin Ng scored 10 points and Michael Chan added eight points for SAMURAI, who led 20-10 at half time and scored the first basket in second half. Still down by 27-22 through three periods, Patrick Tse scored six of his 11 points which was capped by two free throws to cut the lead to 33-34. With 22 seconds left, after a Tiger’s timeout, Patrick Lai was called travelling at back court. Jackie lai was called for an unsportsmanlike foul, Benny Wong hit two free throws for an one-point lead, the first for Tigers in the game, with 10 seconds left. He added two more free throws in the next possession as Tigers led 37-34 with eight seconds left. Mark Au’s three-pointer did not hit the rim as time expire and Tigers took a dramatic victory to top among the four teams and assured a place in Final for O4.

M.I.B. and G.T. Explorers both only got six players only but M.I.B. had three players in double-digit scoring to keep G.T. Explorers winless in the series.

M.I.B. used a 17-point third period to extend the 4-point half-time lead to 31-14, and the Explorers were never back in the game again the rest of the way.

“Hin” and Ming Yan Chow scored 11 points and Dickson Chau added 10 as M.I.B. routed the Explorers 44-21. Terry Tang, the new big man from Explorers scored 5 points but missed nine of his eleven tries. Eddie Sze also added five points. Dick Lee, Vincent Wong and Taylor Ng each had three. Thomas Lau shot 1-on-11 only from the field. The victory gave M.I.B. (1-1) the chance to fight for a Final spot as they will face SAMURAI (also 1-1) on November 7 in the third game of the series.