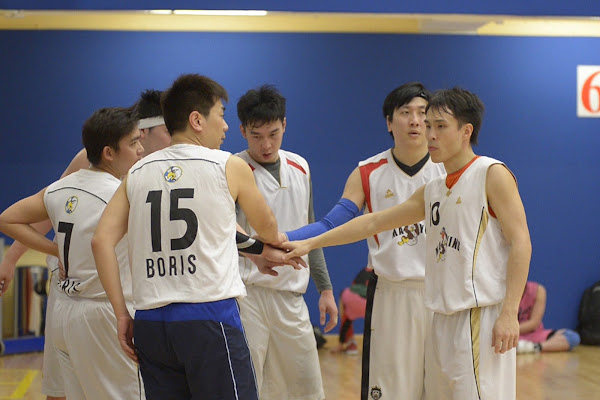 Already the defending champions, hot hands from Otto Chan (MAY #2) and Jonathan Poon (MAy #44) lift MA YING for a second straight win in 2013 as they beat Spartans 46-33.

Otto scored a game-high 17 points and added six rebounds, Jonathan had a double-double with eleven points and rebounds apiece and they combined to shot 9-for-13 from the field while making 10-13 at the line.

Otto scored all his three points in the first period on free throw and the points he scored matched the whole Spartans team could have in that span.

A three-point play by Otto extended the lead to double digit in the middle of the second and MA YING then brought a 23-11 cushion into the intermission.

The unstoppable Otto made two more free throws which put MA YING up 27-11 in the beginning of the second half, before Wong Chau Keung (SPN #78) added the first two Spartans points in the half. Danny Ho (MA YING #9) made a pair of free throws to start a seven-to-nothing spurt that was capped by another basket from Otto, when MA YING was leading a comfortable 34-13 late in the 3rd period.

Lam Chun Shek (SPN #4) made a three-point basket and Chan Tik Kei (SPN #13) added a free throw but was no threat to the defending champion which kept a 22-point margin entering the final period.

MA YING had leads from the beginning till end and opponents could only get as close as one point in only the first period in both two games.