The game schedule would NOT be changed normally once announced, except the following cases listed below. A notification to the League ONE DAY BEFORE is also required for any of the changes to be made.

1. Switching Match-Ups Within the Same Day

The simplest change allowed is to play on a different time slot on the same day a match-up was originally scheduled.

Any changes similar to this concept will be allowed with the CONSENT OF ALL FOUR TEAMS. 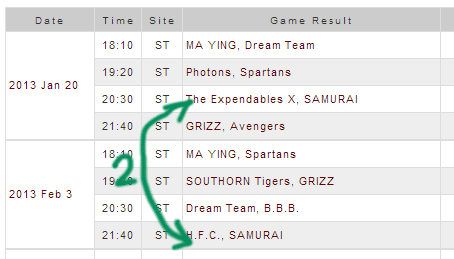 Another case is simpler in terms of number of teams involved.

Example:
If XPX and HFC agree to switch their own match-up against the same opponent, which is SAM in this case, XPX can push their schedule to Feb 3 while HFC will play first on Jan 20.

It does not make sense when: (i) A single same opponent shall not be assigned on the same day normally; (ii) One of the teams plays two games under the revised schedule (unless that particular team intended to do that!?)

Only the CONSENT OF TWO TEAMS is required. 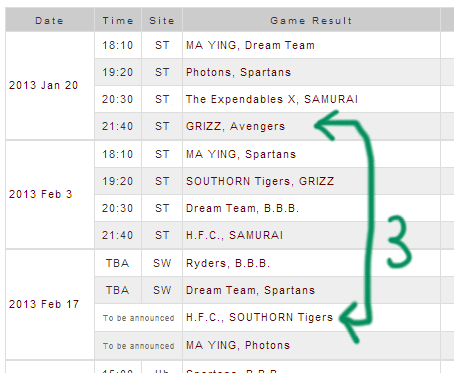 This third case is the same as the first case, except the change is made between match-ups on two different days.

Example:
HFC and SOU agree to play on January 20 in the slot that was originally assigned for the GRI-AVN match-up, while GRI and AVN will postpone their meeting to February 17.

Similar to case one, this change can be made with the CONSENT OF ALL FOUR TEAMS.