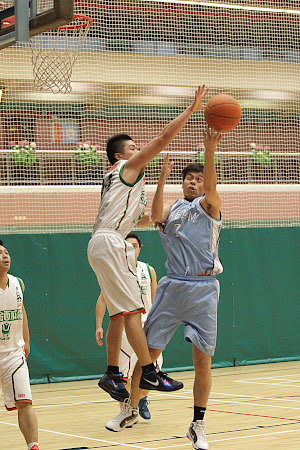 A blocked shot is charged to a player any time he appreciably alters the flight of an FGA and the shot is missed. It recognises a clear rejection or deflection of a shot by a defensive player. The ball may or may not have left the hand of the shooter for the block to be counted.

A shot can be considered blocked even if the ball was not in flight before being blocked. In fact, the ball doesn’t have to be above shoulder-height before a shot can be blocked. As stated previously, the act of shooting, for statistical purposes, shall be an upward and/or forward motion toward the basket with the intention of trying for a goal.

A rebound must follow a blocked shot unless the ball becomes dead before a player gains control. If the ball does go dead, then give a team rebound to the team in-bounding the ball.

A blocked shot should be charged only when the shot is deflected enough to prevent it from scoring. As obvious as it may appear, it needs to be noted that when the shot is successful, it cannot be counted as a block even though it has been touched.

1. A5 shoots and the ball is touched by B5 in an attempt to block the shot. The ball continues into the basket.

Since the ball continued into the basket, B5’s touching it did not alter its flight appreciably. Ignore the touching, charge A5 with an FGA and an FGM but do not charge B5 with a blocked shot.

2. A5 goes up for a dunk attempt but the ball is stripped at waist-height by B5 before it leaves A5’s hands. The ball is recovered by B4.

A5 is charged with a turnover (Ball Handling) and B5 with a steal. A5 may have possibly begun a shot attempt, however the ball was knocked loose at waist height and so a turnover and steal are charged.

3. A5 is driving through the restricted area and has the ball stripped by B5. The ball ends up with B4.

Charge a ball handling turnover to A5 and a steal to B5. To charge a field goal attempt, block and rebound A5 had to have been attempting a field goal.