(Below is the REBOUNDS section in FIBA Basketball Statisticians’ Manual 2009) 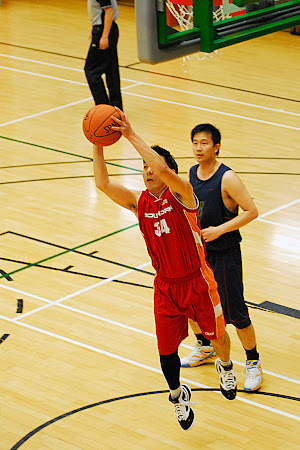 Rebounds are divided into Offensive and Defensive. A team rebound is charged when:

The recovery may be accomplished by:

An offensive player who attempts a tip (put-back) from a missed shot is charged with an offensive rebound and FGA provided the tip was controlled.

A shot that is blocked and recovered without the ball going dead will be recorded as a rebound to the player who first recovers the ball immediately after the blocked shot.

1. A missed shot is retrieved simultaneously by A5 and B4.

2. After a missed shot, A5 jumps and catches the ball but falls and loses control, it is retrieved by B4.

Charge A5 with a rebound provided you are satisfied he had control prior to falling. If this is the case a ball handling turnover would be charged as well. If you are not satisfied A5 had possession then B4 is charged with the rebound.

3. After a missed shot, B4 catches the ball at almost the same time as A5 fouls him.

The statistician must decide if B4 had control of the ball for a split-second before being fouled. If so, charge the rebound to B4. Else Team B is charged with a defensive team rebound.

4. A4 jumps and attempts a shot that is blocked by B5 without the ball leaving A4’s hands. A4 lands with the ball and is called for a traveling violation.

A4 attempted a shot so there must be a rebound after the block but before the violation occurs. The statistics that apply in this situation are: FGA A4, Block B5, Offensive Rebound A4, Turnover A4 (Violation).

6. A3 misses an FGA and as players are fighting for the rebound (a) A4 is called for an over the back foul on B2 (b) B1 is called for a holding foul on A1 (c) B4 tips the ball out of bounds.

8. A2 misses the first of two free throws.

There is no rebound as A2 is entitled to a second free throw and the ball is dead.

9. A2 misses an FGA immediately before the period ends, and before any player retrieves the rebound.

Charge A2 with an FGA and do not charge any rebound as the ball is dead.