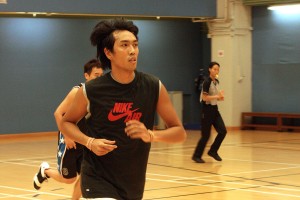 Despite having only five dressed players in the first half and a total of six players taken the floor, M.I.B. started the game by a 6-0 run and held SAMURAI scoreless in the first period. The men in black did not trail in the whole game and went on to be the first winner in this newly organized O4 games.

It could be difficult to predict this result not only seeing the short-handed M.I.B. roster but SAMURAI acquired strong big man Eric Ngai from Dream Team, the latest S.B.L. champion, and this become his first full-court game in SAMURAI uniform before the SBL begin next year.

When Adrian Chou and Jefferson Tong were still wondering how many and when will other teammates be coming, the full team of SAMURAI were already having a pre-game meeting at the balcony of the Sports Centre. However, preperation does not seemed to help enough and the history re-do itself again as SAMURAI lost also to a 6-man M.I.B. team in the first round playoffs of S.B.L. in 2007.

Eric Ngai scored a game-high 10 points for his new team, but there were not enough help otherwise. Shooter Chi Chiu Au and fast guard Kelvin Ng combined 0-11 from the field and even defense specialist Jackie Lai recorded five steals, he was fouled out with six turnovers.

Chi Fu Yuen had six points and eleven boards, Jefferson Tong and Tim Cheung each scored seven. Samson Tong was scoreless, missed all six attempts but he had six steals. Team captain Gilbert Fu did not attend the game since another M.I.B. and close friend Ben Cheng was having his wedding this day. Corn Hui was late to the game and spent almost the whole first half leaving the venue to find pants before he could play.

The winner plays on November 16, at 17:15 at Sheung Wan Sports Centre.