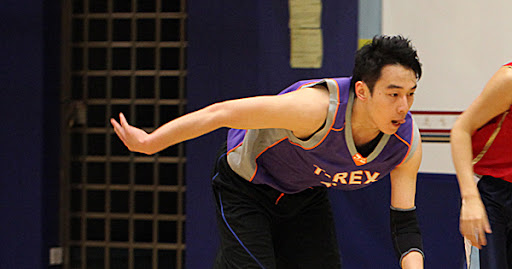 Jonathan Poon scored seven of his game-high 17 points in the second half and grabbed 13 boards, Vincent Siu added 10 points for T-REX in a 35-30 victory over Chung Sing, who failed to come back behind 10 points from Ming Yan Chow.

Chi Yip Wong had four points  in the first period and T-REX held Chung Sing to a single field goal for 9-2 lead. Chow Ming Yan was the only scorer for the young team.

A 7-0 run by T-REX started the second period was capped by Jonathan who scored five straight points for his team including a three-point play. And Chung Sing can only use  a time-out to stop it. The 14-point lead was the biggest in this game. Jonathan did not miss a shot from both the line and the floor in the period and grabbed five boards including three from the offensive end.

Chi Ho Yu scored a basket under the rim, Elvin Tam hit two baskets and Dickson Chau also added two as Chung Sing’s offense was finally coming, but it was still not enough to get closer than ten points the rest of the first half.

After Jonathan made a pair of free throws and the team re-gained a 14-point advantage, Chow Ming Yan scored four points on two fast-breaks before T-REX called a time-out. T-REX needed another time-out after failing score but seeing Chow Ming Yan made another fast-break point, being fouled, and finished the ensuing free throw for a three-point play. Lok Ming Sin’s two points helped Chung Sing to conclude a 9-0 spurt, and pulled within 19-24.

Jonathan was again the savior of the team. He scored all the team’s points in the third period and his last five points in that span kept T-REX with a double-digit cushion entering the final stanza.

Vincent turned the ball over four times and five overall by the team in the final period gave Chung Sing another chance to come back.

Elvin Tam’s layup and a three-pointer by Sin cut the lead to 28-33, as T-REX needed the final time-out with more than two minutes left.