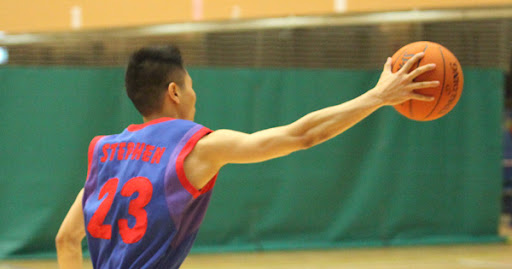 Down by seven points late the 4th period, Bryant hit a three-pointer  followed by six points from Stephen, which capped a 9-2 run to tie the game at 38-all. And both teams could not score again as the regulation ended.

Michael Chan hit two free throws to begin the extra period, made another basket after  Challenger Tsz Leung Chang  split a pair of free throw for a 42-39 lead. Bryant then hit from deep the tie the game and hit another three in just the next possession for a 45-42 lead. Yu Yin Hon made a free throw with less than a minute left and the four-point lead was good enough to keep D.S.F. from their first victory this season.

After a tight first period, two teams tied at 6 entering the second, when Challengers looked flat and struggled to score, or defend.

Bryant’s first trey of the game helped Challengers to pull within 11-12, but only saw his team to score only one more basket from Stephen the rest of the period. A 14-2 spurt brought D.S.F. a 13-point lead into half-time.

After the break, D.S.F. got loosen perhaps with the big-lead.

Challengers shot 6-on-12 in the 3rd period and seven turnovers by D.S.F. helped them to stay in the game with only a 5-point deficit entering the 4th period, before Bryant and Stephen took over.

In terms of number of players, with only six players in uniforms, Challengers were not worse than D.S.F. who has no players at the bench at tip off. Benson Kwon arrived the game hall only in the middle of first half.

Stephen topped his 17-point performance in just the previous game with 21, and is a league-leading 19 points per contest.

Bryant last hit 4 three-pointers back to 2006, when he was with G.T. Explorers and his team lost 40-62 to SOUTHORN Tigers. The Challengers’ shooter did not make a single trey since after they lost to Tigers in overtime last season, when he had one in February.

This was the 5th game by D.S.F. that went into overtime.