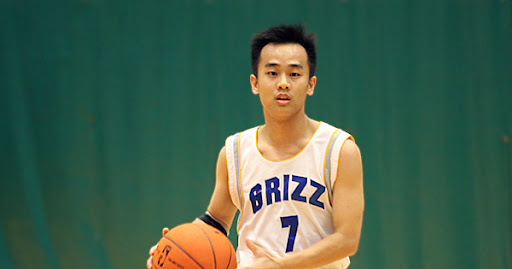 Leo Chow scored 20 of his game-high 22 points, also a personal best, against SAMURAI in the first three periods but GRIZZ lost to SAMURAI 37-42 on Sunday.

SAMURAI’s season debut was an exciting one with 5 ties and 20 lead changes, and similar to last year’s debut, also against GRIZZ, they left the court with a win.

Neither team could lead for more than two points throughout the first period. Tough defense from both teams kept the score at two-all until Patrick Lai’s basket for a 4-2 lead. Leo Hit his first three-pointer afterwards for 5-4, took back the lead, and began his shooting night.

Kelvin Ng’s layup put SAMURAI up 12-9 early in the second period, but Leo scored ten of the teams’ next 12 points, from three-point land, layup and at the line.

Eric Leung hit from deep for a  2-point lead but Leo answered with his own three-point shot. Leo’s third trey before half time gave GRIZZ a three-point lead.

Patrick’s basket in the middle of the third period stretched the lead to four. Raymond Pak grabbed his own miss in the next possession and dished to Leo, whose 4th trey in the game cut the deficit to one again.

Tony Chow and SAMURAI exchanged baskets — and the lead — near the end of the period and GRIZZ was still down by one entering the final stanza.

Kit Sam Tso made his first basket of the game to begin the 4th period and took the lead for GRIZZ, and it was the team’s last lead.

William Wong’ jumper gave SAMURAI a 35-30 cushion in the middle of the period.

Both times Raymond scored for GRIZZ and SAMURAI answered. GRIZZ could not get within less than three points until Tony Chow split a pair of free throw with less than 30 seconds left in the game.

Jackie was fouled in the final seconds, and  hitting the first free throw but missed the next. Holman Kwan grabbed the offensive board and his put back sealed the game.

While all SAMURAI players scored at least three points, only four GRIZZ scored in the game.

The game has five blocked shots combined from two teams.

Jackie filled the box score with 13 points, seven rebounds, two dimes, two blocked shots, a steal and was without a single turnover.

SAMURAI beat GRIZZ last season but did not win a second game the rest of the season and missed the playoffs.