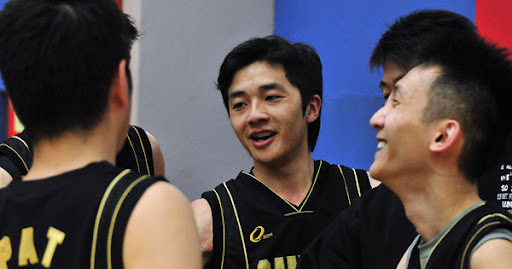 G.T. Explorers had ups and downs in the first month of 2010. After beating the buzzer and SPIRIT, formerly known as M.I.B., the blue team scored a league low record of only a pitiful two points in a 68-2 loss to Photons. The concluded the busy month with a 41-32 loss to GRIZZ and was idle in February.

SAMURAI started the season late due to change of schedule in favor for James Kwan’ wedding on Jan 3. The team again begin the season against GRIZZ and similarly, they won in a close fight 42-37. They had only seven players again like in the previous match up of two teams. SAMURAI followed by a second victory after a close fight against Photons.

SOUTHORN Tigers had a sluggish performance and scored only 20 in its 2010 debut against T-REX but was able to bounce back against Chung Sing with a 31-22 victory in February. However, another collapse by the team gave away another 4th period lead and lost 39-31 to Challengers.

M.I.B. was technically gone from S.B.L. as they played mainly by a third generation of players and the team renamed as SPIRIT. The only players remained in the team from M.I.B. since the team established were Gilbert Fu and Jefferson Tong.