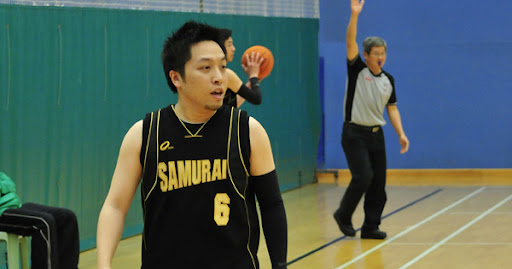 Eric’s three-point shot that broke the tie turned out to be the game-winner for SAMURAI’s 26-23 victory over Photons, which had their first loss of the season.

SAMURAI led as many as eight points when Kevlin Ng complete a 8-0 spurt to begin the game, and five different players scored the first 10 points for SAMURAI in the first period as they took a 10-6 advantage into second period. Despite getting extra second chances from the offensive boards, Photons could not convert them into basket. Ming Yan Tsui split two pair of free throws for two points and Harris Wong and Cherry Tsui were the other two players with a basket in the period.

The teams slowed down in the second period.

Eric Leung’s three point shot put SAMURAI up by 10 late the period but Tl Li had four points for Photons, which brought a 18-12 SAMURAI lead into the half.

Photons still could not find the scoring touch early in the 3rd period, and Eric Ngai protected the glass and grabbed all the misses by the opponent in that span. Failed to score even after a time-out, SAMURAI watched a 6-0 run capped by Alex Chan’s basket that cut the deficit to 18-20 for Photons.

Harris Wong hit a three-pointer in the middle of the final period which tied the game at 21-all and two points from Alex Chan put Photons for a lead the first time in the game. Both teams could not score again until Jackie Lai’s basket that tie the game again at 23-all.

Eric Leung’s three-point shot off the glass near the end of the game give the edge to SAMURAI and Photons failed to score as time expire.

The 16 offensive boards reflected the difference in field goal attempts, where Photons had 55 and SAMURAI had only 38. Ming Yan Tsui topped the previous league record by 18 rebounds — 7 from the offensive end — this game, he had only two points but missed all twelve attempts from the floor.

Harris’ three-pointer is the only made for Photons, which had eighteen attempts. The Photons star had five steals and accumulated a league-leading 74 steals in 28 games played. Jackie Lai was third with 62 in 30 games.

It is the sixth time Eric hit three or more three pointers in a single game.

Lai’s brothers, Jackie and Patrick, each had six turnovers but combined for five assists. Jackie had no turnovers in previous game in more than 30 minutes of action.

Jack Chiu threw his glasses to the ground after he was fouled by Cherry Tsui.