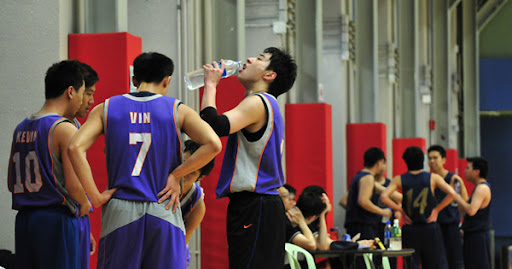 Echoing the league’s slogan, T-REX and D.S.F. really met the minimum requirement to play a game. Each team got five players for all the 40 minutes of action and Jonathan Poon stand out from all of them to scored 18 points and led T-REX for its third win in four games.

D.S.F. could not find their scoring way throughout the game against defense from Vincent Siu and Jonathan’s athleticism. After a 13-4 first period, both teams looked tired and the scoring was down to 6-4, while T-REX still has the edge. The Timeout by D.S.F. would not help after Jonathan scored another basket for a 16-6 lead mid-way through the 2nd period.

D.S.F. continue to struggle and stamina played the most important the rest of the game.  Jonathan shot 4-for-5 from the field and made all four free-throws in the second half for his game-high 18 points.

Michael Chan had eight of his team-leading ten points in the second half.

The game was delayed for 5 minutes as T-REX’s fifth player, Frankie Lee, arrived the court late. Soon after the game started, Frankie got a slap on his face and his glasses fell to ground and was broken.