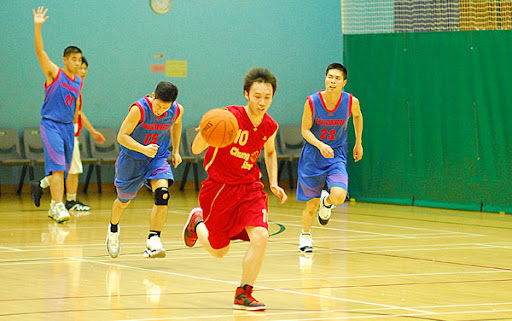 Wai Yip Mok scored 19 points and Lok Ming Sin added 11 and 9 for Chung Sing, who beat Challengers 42-38 and avoided an early exit for the season.

Lok Ming Sin socred six points in an 8-0 spurt to start the game before Challengers got a three-pointer from Bryant Chan and a basket by Yu Yin Hon that cut it back to 5-8. After a Chung Sing timeout, Chi Shing Yip added a free throw and Wai Yip Mok made his first basket. Chung Sing led 13-7 entering the second period.

Yu Yin Hon’s free throw capped a 7-0 run which put Challengers back to a one-point lead. Ken Sy finished a three-point play for a two-point lead and Yu added another basket, helped to bring a 20-16 advantage at half time.

After halftime, Stephen Tsang, entering the game with a league-leading 15.3 points, helped to extend the lead to 24-16.

But that lead evaporated as this is when the young kids started coming back.

Started by a three-point play, Wai Yip Mok did not miss a beat, made all his next five attempts in the period and Chung Sing rode this 17-2 run to turn an eight point deficit to a 33-26 lead, and Chung Sing never trailed again.

Elvin Tam hit from deep in the final period to put Chung Sing up at 38-30. Still having a size advantage, Lap Chan’s scored two points off an offensive rebound to cut the lead to 34-38 mid-way through the period.

Wai Yip Mok added two more baskets, the last one off from the 5th assists by Lok Ming Sin for an eight-point lead again and Challengers could not challenge the time and lost their third game this season.

Stephen’s scoring dropped to 13.8 as is tied second in the league. Ken Sy led all Challengers with nine points. Yu Yin Hon had six offensive rebounds and twelve overall.

Chi Ho Yu did not play, left Chung Sing well undersized but their athelitcism compensated for the disadvantage which was reflected with the slight difference in rebounding.

D.S.F. still own a tie-breaker over Chung Sing should both teams tie for the same record. MA YING (2-1) and SOUTHORN Tigers (2-3) also beat Chung Sing earlier this season thus unless Challengers are involved in the tie-break or D.S.F. failed to find a second win, the final standings is still a cloud for the bottom teams.