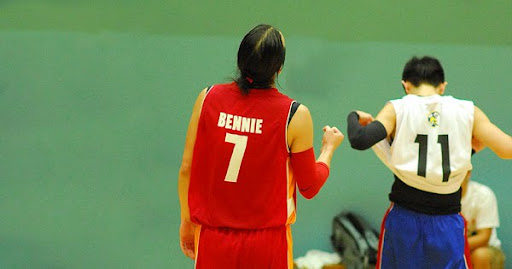 New team MA YING did not suffer from a first loss until the referee blew the whitsle at the end of overtime. Benny Wong  scored seven of the team’s 12 points in the extra period and SOUTHORN Tigers won its second game this season in a 57-53 victory.

Playing without some bigs against Danny Ho and his MA YING, SOUTHORN Tigers looked to suffer a huge disadvantage in size. Facing Chung Ming Mok does not mean they could use speed either.

After Chi Wing Chow and Ben Cheng both had three fouls, Adrian Chou was the only natural forward-centre in the lineup and replacement by Benny at low post does not help. MA YING took advantage and had six offensive boards in the period. Ivan Shiu and Boris Lee combined to have three potential three-point plays in the period but just none of them hit the free-throw to complete those.

Ken Leung hit a trey off the glass but Tigers were still down by 20-26 with less than 20 seconds to play, Cindy Lee hit a hers to cut the deficit to only three points as MA YING missed the next basket as the game entered halftime.

Ching Yi Mak, one of the only three registered female players in the league, started the second half, and swished two straight shots for Tigers, helped the team to stay close. Ivan Shiu’s free throw kept a one-point lead for MA YING into 4th period.

Ben Cheng’s three-point play put Tigers up 39-37 and Benny made two free throws down the stretch for a 44-41 lead. Danny’s basket cut the lead to one again but the tallest player in the game was fouled out as MA YING sent Benny to the line again.

Benny made the first but missed the next, giving MA YING the rebound and Chung Ming Mok a chance to tie the game, only he air-balled free throw and could not complete the three-point play which could give the team a lead with only seconds left. This sent the game to overtime.

Lewis Lau made a quick running basket that took a lead right at the start of overtime. Adrian Chou’s basket tie the game 47-all in just the ensuing possession.

Ben was called his fifth foul on Ivan and the Ivan completed the 3-point play which put MA YING to a 50-48 lead.

Benny hit a long three-point shot and drove to the basket for five points that put Tigers up to 53-50. After Patrick’s layup, Lewis hit from deep and turned it to a one-possesion game again. Benny was sent to to line again and did not miss in overtime, making both free throws in the closing seconds that sealed the win.

Danny Ho had ten points and nine rebounds before foul out. Chung Ming Mok led all MA YING with 14 points and three steals, and he has scored in double-figures in all three games this season.

Ivan’s 15 rebounds is a personal best. MA YING had 24 offensive rebounds and an overall 43-29 advantage, however, they missed 21 of their 31 free throws while Tigers made 12-21.

Turned the ball over ten times in previous game, Patrick Tse did not commit any after his second in the third period. He stepped up in the abscence of other forwards by grabbing eight boards, and filled the box score with six assists (season high in the league), five points and a steal.

Tigers Centre Wilson Chow was out of town, Will Kam arrived the court in the middle of third period. Edward Fong, Terence Chan and Ray Chan did not attend the game for a second straight time, left the Tigers with only eight players counting two female players to start the game.

It is the first win for former M.I.B. centre Adrian Chou in new uniform.

Benny celebrated his 40th game in SBL with a personal best 21 points and a victory.

The 110 points combined is a league-most and it is the 12th SBL game went to overtime. Tigers lost in overtime to T-REX 53-56 and the 109 points was a previous high. Chung Ming Mok was a T-REX back then.

Before MA YING could move the ball to front court in the middle of the second period, Cindy Lee, the smallest player in the league, drew an offensive foul from center Tai Chi Seto, probably the biggest player in the game.