Jackie poured 18 and 11 in tough loss 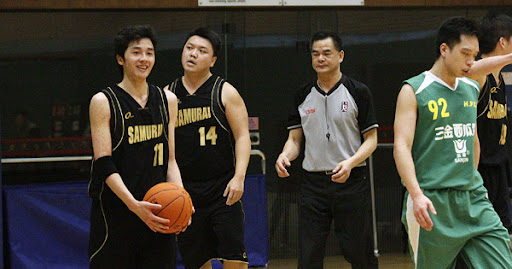 Jackie Lai became the first SAMURAI to score a double-double with 18 points and 11 boards. He brought his team from a seven point deficit to a tie. But H.F.C. beat SAMURAI in a second straight game in final second and remained unbeaten this season.

Tabo Chak scored all his nine points from the charity strip. The all-time leading scorer of SBL could have reach double-digit scoring. He was sent to the line with only one second left. He calmly made the first free throw that break the tie but intentionally missed the second which would not allow SAMURAI to gain a potential shooting opportunity.

Tabo made two free throws late in 4th period that put H.F.C. up by nine points. Patrick Lai made two free throws and Jackie’s basket cut it to 36-41 with more than a minute left. After a time-out, H.F.C. lost the ball in a throw-in and Jackie grabbed his own miss for another quick two points which force H.F.C. to use another time-out.

Holman Kwan fouled Tabo without the ball before a in-bound pass can be made and the later made both foul shots. Jackie’s three-pointer cut the lead to 41-43 with about 10 more seconds left.

Jackie stole the ball in the ensuing possession and Patrick drove to the basketball to tie the game with eight seconds left in the game.

H.F.C. moved the ball to front court, Tabo fell to the ground with the ball, and the whistle blew.

While SAMURAI players were saying this is travelling, the referee signalled a foul call which gave Tabo another Heroic for his team.

Colin Wong’s basket mid-way through the 3rd period give H.F.C. a 11-point lead, the biggest in the game. After a SAMURAI time-out later, Holman Kwan’s free throw cut the lead to only 30-24, but H.F.C. re-gain an 8-point lead entering the final period.

Led by Tabo’s nine points, no players from H.F.C. scored in double-figures and eight players scored four or more points. Andy So made at least one trey in his last eight games.

It is only the first time a SAMURAI player scoring a double-double in 37 games the team played.

Both teams missed only one free throw and combined for 21-23 at the line.

The only match up between the teams last year ended in a similar way where Jackie and Tabo were involved. Jackie lost the ball out of bound when the game was tied giving H.F.C. the chance to win. The main difference of the games is that SAMURAI come back from behind on Sunday while it was H.F.C. rallying back last year. But in both games, Tabo avoided the game to overtime by scoring the game winning point just before the buzzer.