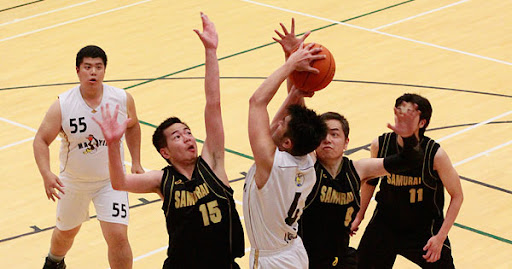 Six players scored 5 or more points to lead a balanced attack for MA YING to rout SAMURAI in a 45-24 victory. Jackie Lai and Patrick Lai each scored 8 points in another sluggish performance which is not enough to help them win a second playoff game.

SAMURAI was held scoreless in the first period, when they allowed MA YING to start as quick to score 15 points.

A basket by Otto Chan in the second period put the new SBL team this year to a 25-and-nothing lead. By then, SAMURAI had misfired for twelve times.

MA YING missed only one field goal, a three-pointer and one free throw in the second period, when they shot 3-for-4 from the line and also from the field before Patrick Lai break the ice for SAMURAI by a layup.

Patrick could become the only scorer for his team before halftime after he hit a three-pointer. MA YING led 30-5 at the break.

Kelvin Ng and Holman Kwan scored two points each, Patrick’s trey concluded a mini 9-4 run helped SAMURAI to make the gap under 20 points. SAMURAI, however, could never get closer than twenty the rest of the game until Jackie hit a three-point shot near the end of the game.

SAMURAI only got four free throws, all from Holman Kwan who was sent to the line twice but missed all. Entering the game with well less than half at the line (.48), MA YING shot 20-28 at the charity strip on Sunday.

Chung Ming Mok was 1-6 from the floor but made all four foul shots to score seven points. His scoring average dropped to 15 in six contests but is still a good lead over Stephen Tsang (CHA 12.9), Benny Wong (SOU, 11.4) and Michael Chan (DSF 11.1), all eliminated in first round already. No other (qualifying) player is scoring over eleven points in the mean time.