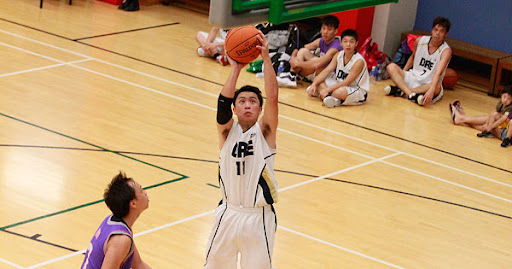 The probably the closest game in playoffs so far this year featured the defending champion and they beat T-REX in a 34-29 victory.

Chun Hong Tsoi hit a three-point shot that break the 26-all tie early in the final period and Dream Team held T-REX without any more field goal the rest of the game to reach semi-final in all seasons played in SBL.

Since Jonathan Poon’s free throw that put T-REX 3-2 early in the game, every time a team scored, the lead changed. Man Kit Cheng’s basket close the first period at 9-8 for Dream Team.

Already playing with great intensity, both teams played even tighter defence in the second period. A trey from Chun Tung Hui had put T-REX to a 18-14 lead in the middle of that 10-minute span. Man Chun Chow answered by his three that tied the game and both teams could not score again before half-time.

Entering the second half with a 20-all tie, neither team could get away for more than three-points.

T-REX needed four offensive rebounds to kept their possession alive in the beginning of the 4th period and Chi Yip Wong’s free throw tied the game, the sixth time in this contest.

While T-REX was down 29-32, Jonathan pushed Man Chun Chow to the floor when both chased for a loose ball. The T-REX forward was called for an unsportsmanlike foul. Chow made the first but missed the next, while Dream Team still have possession. He was fouled again in the ensuing possession and made another free throw that put Dream Team ahead 34-29 with less than a minute to play.

Hui and Wing Kit Tang each missed a three-point shot before the game end.

Coming off an 25-10 performance, Tang was held to only one point and he missed all his ten field goal attempts, eight from beyond the arc. Chun Tung Hui led all T-REX with 12 points but was only 3-for-14 from the floor.

Dream Team’s “motor”, Seung Lung Chin, did not play. Man Chun Chow was 1-for-9 from the floor but managed eight points. Chun Hong Tsoi was 14-7-1 with three treys.

Entering the game with 42 points in each of the past six games, the defending champion lost only (twice) when they were held to less than 30 points.

T-REX got only five players throughout the game.