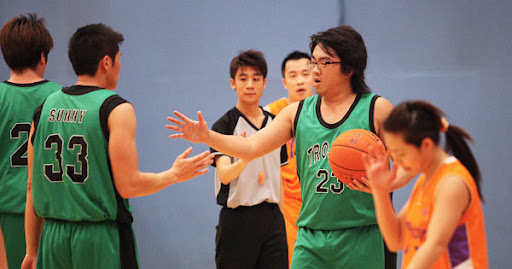 Photons put up a fight for one period, slowed down the next, and was completely outplayed in the second half. Trojans march to semi-final after the 54-31 victory and will play in a re-match of last year’s semi-final against Dream Team on June 6.

Cherry Tsui, Tl Li and Alex Chan combined for a 6-2 run that end the first period with a tie at 11-all, but no Photons could score again before a 9-0 spurt by Trojans.

Li’s basket and Cherry’s three-pointer helped Photons to stay close at 16-22 but Sunny Wong finished a three-point play that end the first half with a nine-point lead for Trojans.

Ming Yan Tsui grabbed his own miss and was fouled in the third period, the forward made both free throws when Photons was already down 18-33. Jerry Lee scored four of the team’s next ten points and Sunny made two more free throws which put Trojans up beyond twenty points entering the third period.

Ming Yan was the only Photons scorer that period, having got all his team’s dismal six points. He also scored the team’s next four points and Tl added two which the 6-to-nothing run could only reduce the deficit to 28-47. And half of the final period is done.

Photons bench was tossed for a technical foul late in the 4th period and Teny Wu left the court before the game end.

Trojans Coach Samuel may not agree, but Siu Lung Cheung was called for three offensive fouls in the game. Despite 12 turnovers, the number 23 on Trojans had another all-round performance with eight points five boards, two dimes and one steal and block each. William Yim added seven points off the bench.

After this victory, Trojans averaged 50 points per game while beating their opponent by an average of more than 14 points in seven games.