GRIZZ run sluggish H.F.C. out of the playoffs 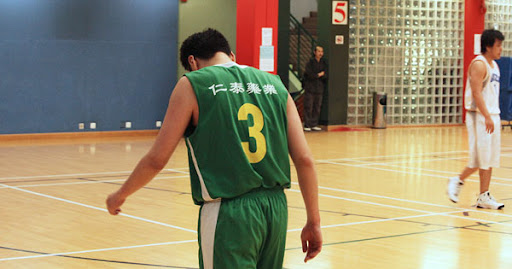 Ben Yu scored all his 16 points in the final period, helped cutting a 17-point deficit to only six towards the end of the game, but the hole was too big for the sub-par H.F.C. to overcome. GRIZZ upset a higher seeded team a second straight time after a 50-37 victory over H.F.C. and will face MA YING in the semi-final on June 6 at Western Park Sports Centre.

An expected championship game between two teams in green just will not happen, at least not in SBL this year.

After GRIZZ scored the game’s first four points, Andy Ching completed a three-point play but those were all  H.F.C. could have in the first period. H.F.C. had three turnovers in their final four possessions and Terry Suen, Kit Sam Tso and Ka Wai Fu combined to finish the period with 3-for-3  and six points as GRIZZ took a 12-3 lead.

Colin Wong scored the first basket in the ensuing period, but H.F.C. did not look like they were ready to recover yet. Raymond Pak grabbed his team’s miss and put back for a 15-5 lead. The big man already scored eight points for GRIZZ just a couple minutes into the 2nd period.

Continued to be turnover-prone, H.F.C. could find some scoring touch and managed to finish the first half by a 6-2 run but was still down facing a six-point deficit.

GRIZZ kept their dominance on the board, five offensive boards and forcing six turnovers in the 3rd period gave them more than twice the shooting chance from the field than H.F.C. and making half of them gave the team 14 points. In that ten minute span, Tabo made two shots at the line, scored two points from the field and added another basket from beyond the arc, but the seven points were also all his team could have.

Hitting all four free throws in the beginning of the final period, Raymond Pak helped to extend the lead to 35-18, before Ben looked to bring the team in green uniform back.

Failing to find Andy So for open looks, H.F.C. relied on another perimeter chance.

Ben Yu swished a three-point shot from the corner for 21-35 but Raymond and Roger Mahmud were still dominating under the basket. After Roger’s free throw re-gained a 17-lead in the middle of the period, Ben scored two points and GRIZZ strangely called a time-out, which looks to be more needed by their opponent.

Colin Wong stole the ball from Ka Wai Fu for two fast break points and Ben hit another three-pointer that cut the lead to only ten.

While Kit Sam Tso and Ka Wai Fu were perfect and combined for another four free-throw points, Ben Yu continued his streak from the field and at the line, finished a personal 8-2 run that cut the lead to only 36-42.

Ka Wai Fu and Tabo exchanged one foul shot each and with less than 40 seconds left, Terry Suen missed an unnecessary fast-break but H.F.C. still could not get the rebound until Terry grabbed his own miss and tried another quick two. Tabo missed two more desperate long shot and Ka Wai Fu added two more free throws to end this 50-37 contest.

With ten more points on Sunday, Tabo’s 500-point run stopped at 458. After three straight seasons with over 15 points a game, the all-time scoring leader failed to reach double-digit scoring in a second straight year but maintained an outstanding assist-rate (4 per game) while reduced the turnover number from nearly five a game in last two seasons to less just a total 11 in seven games.

Off an league record of three-point shooting and a 21-point effort, Andy So was scoreless in his second start of the season. Ben Yu did not miss a beat, making all his first five shots in 4th period and his 16 points is a personal best.

Ka Wai Fu averaged 14 points in the last three games, making more than half of his field goal and missed only four of this 17 free throw attempts in that span. H’s 15 point in this game put him back to 4th in all-time scoring with a total 320 points. Trojans’ Jerry Lee (335) is the only player above him who is still active in SBL this season.

For three seasons, GRIZZ win all six games when Raymnd had ten or more points.

Leo Chow made at least one three-pointer in the first five games this season and totalled ten treys in that span, but he missed all his six tries in the last two contest.

Despite falling short to reach semi-final, H.F.C., the only team taking part in Southorn Basketball Flag not in final four, is still a top-four seeded team being the 4th best SBL team in the coming event.