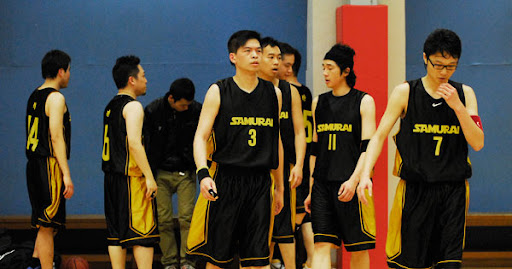 SAMURAI got three new players, a new uniform and look, but not a good new start as they lost 22-34 in the season opener to Chung Sing.

After scoring the first basket of the game for a 2-0, SAMURAI did not lead for the rest of the game.

Down by five points near the end of the first period, Jefferson Tong missed a lay-up as Lok Ming Sin grabbed the rebound at the back court. He passed the ball to Ming Yan Chow who then threw it back to SLM, who was already inside the three-point line in the front court. The fast guard took the ball and made the running jumper as Chung Sing led 11-4 entering the second period.

SLM missed his only field goal, a three-point shot, in the second period, but Chi Lok Chan and Ka Hang Yip was perfect from the line and the floor for four points from each of them, Dennis Chang scored all his three points in the same period as Chung Sing was still out-scoring SAMRUAI that ten minute span and took a comfortable 22-10 lead into the break.

Despite scoring only seven points, Lok Ming Sin led his team in scoring for a second straight game. Elvin Tam and Ka Hang each added six and Ming Yan Chow had five.

Patrick Lai scored a game-high eight points and his younger brother Jackie Lai had four for SAMRUAI, who got little help from others.

New faces Dickson Chau and Jefferson combined fo 2-for-13 from the field and made 2-6 at the line, each had three points for their new team. Holman Kwan was fouled out with two points and four boards.

Chris Chan, another new SAMURAI, attempted one field goal off the bench.

Chung Sing won only three times in the past 19 games for three seasons, but is now 2-0 since the beginning of 2011. Chung Sing and GRIZZ are both 2-0 and will face on February 13.

SAMRUAI was without Chi Chiu Au due to knee injury. The forward did not play for the team last season but led the in scoring (10.2) in 2009.