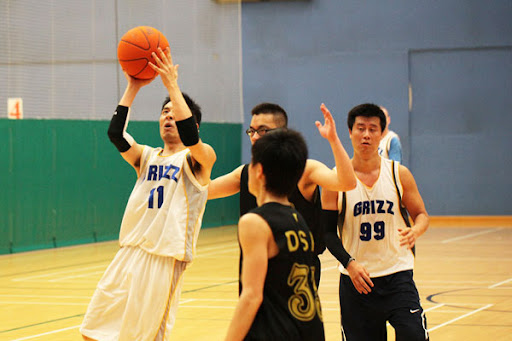 Leo Chow (GRI #7) tied a season-record five three pointers en route for 17 points and Andew An (GRI #99) added 10 and 9 as GRIZZ escaped from a late rally by D.S.F. and advanced to Semi-Final for a second straight year.

Leo hit his second three-point shot and Tony Chow (GRI #11) scored two points when GRIZZ started the second period with a 5-0 run and extended the lead to 17-5.

Three straight baskets for his team from Benson Kwong (DSF #8) did cut the deficit to only six. Andrew split a pair of free throw as GRIZZ took a nine-point lead into the half.

Leo’s 4th trey put GRIZZ to a 10-point lead, and Tony Kept it at a comfortable 28-18 in the middle of the third period.

Michael Chan (DSF #12) scored under the basket and put D.S.F. to 32-36 before GRIZZ was called for a 3-second violation in the next possession. Michael then hit a three-point shot as D.S.F. was down by only one point.

Andrew drove to the lane, scored at the rim and was fouled after putting GRIZZ back to 38-35. After he failed to convert the three-point play, GRIZZ still got the offensive board but another 3-second violation gave D.S.F. a chance still.

With seconds left to play, both teams made mistakes either at throw-in or dribbling and GRIZZ hang on for a one-point victory and will face Trojans on June 12 at Smithfield Sports Centre.

Roger Mahmud (GRI #32) did not attend the game. The GRIZZ forward had surgery after injury in the final division game.

Tony had three chances for three-point plays but he missed all three ensuing free throws.