MAY Outlasted BOB in 2OT 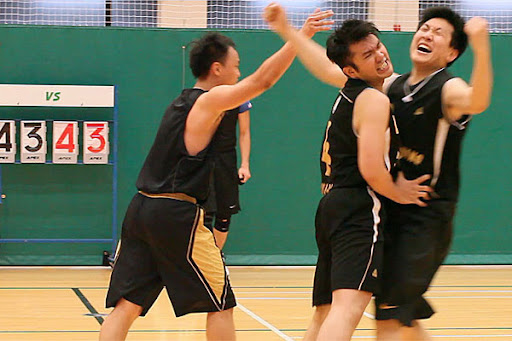 When the game was tied and only four seconds left in the second over-time, Tony Lau (MAY #10) leaped from the floor for the game-winning lay-up but missed. Just Ivan Shiu (MAY #4) did not let a third extra period happen by putting it back to the basket as MA YING edged B.O.B. on Sunday to reach Semi-Final again.

The unbeaten B.O.B. was well under-manned, with only five players dressed, they were prepared to play for all the 40 minutes in the team’s first play-off game in the League. However, there were ten more minutes waiting for them.

With the slightly edge on size and experience, B.O.B. did control the game through most of the first half.

Both teams started slowly and put much attention on defence, and after the game was already five minutes old, B.O.B. was leading 4-2 when MA YING called a time-out. B.O.B. would still take a 8-4 lead at the end of the first.

After Hoi Lee (BOB #2) put up his first basetket for a 12-6 lead, his team would allowed a mini-six-o run which MA YING used to tie the game. Hoi made a pair of free throws later, only was answered by lay-up from Jonathan Poon as the game was tied again at 14-all.

Tony’s basket took a first lead for MA YING before half-time, only had it lost again when Hoi and Ka Ming Fong (BOB #44) scored again and brought a two-point lead into half-time.

Every time B.O.B. looked to pull away, MA YING would comeback as they saw their opponent’s stamina was going down.

Otto Chan (MAY #2) was sent to the foul line with four seconds in regulation and he made both to tie the game. He stole the ball after B.O.B. throw in the ball but the clock expired and this game went into over-time.

The teams simply exchanged basket in the first over-time and never got away. After MA YING centre Danny Ho (MAY #9) made a basketball under the rim for a 37-all tie, both teams failed to score again in the final minute of the period.

After Ka Ming Fong (BOB #44) was fouled out but B.O.B. still hold a 43-40 lead despite playing with only four players.

Otto Split a pair of free throw with 26 seconds left and Chris Shiu (MAY #7) stole the in-bound pass, Vincent Siu (MAY #0) made a lay-up which tie the game at 43-all.

With a final chance to take a win, B.O.B. pass the ball out-of-bound in a fast-break during the team’s final possession while failed to defend the last opponent goal and the division leader lost for the first time since joining the League.

The two big men from B.O.B. switched to wing position after each got four fouls.

The two teams combined for only seven attempts from the three-point zone, where each team missed three times in regulation. The only made came from Ka Ming Fong for B.O.B. in the beginning of the second over-time.

Injury-prone forward Jonathan Poon (MAY #44) was hurt in the first half and did not return.