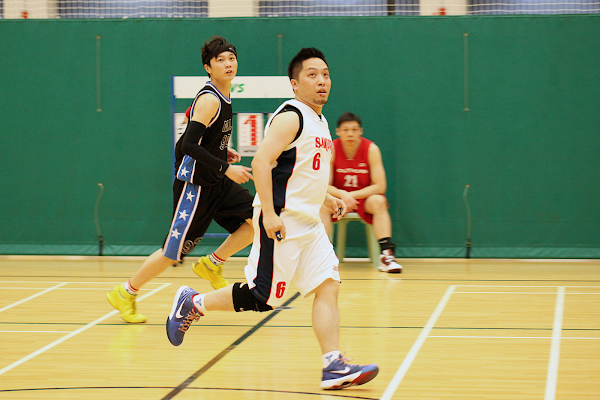 Tigers combined for 86 points in two games, five more than the winner SAMURAI but was win-less. M.I.B. averaged a series-low 34.5 points, but an overtime win saved them from the third and last rank.

SAMURAI (2-0), in the first game on Sunday, even held M.I.B. (1-1) scoreless in the meaningless 4th period and despite trail for the most part of the second game against Tigers (0-2), they comeback in the final minute on the often-careless Tigers turnovers, took a victory which gave them early celebration as the winner of the evening.

SOUTHORN Tigers took the loss and used a 10-0 run to start in their consecutive game against M.I.B., who is idle for an hour and got some rest before fighting for a final victory.

Despite Stephen Tsang (SOU #23) scored the team’s first six straight points in the final period, Simon Chan (MIB#2) hit his 5th trey to tie the game at 39-all after trailing 7 points thru three periods. With four seconds left and a three-point lead, a key turn-over by Wilson Chow (SOU #9), who made a bad in-bound pass and gave Dickson Chau (MIB #92) a final opportunity to hit a desperate three which sent the game to overtime. M.I.B. (1-1) kept the composure and outlasted SOUTHORN Tigers (0-2) to take one win for the evening.

Dickson scored a night-high 21 points in the lone victory by M.I.B., who had Simon hitting a league-recording-tying five three-pointers in the same game. Benny Wong (SOU #7) scored a team-high 19 points in this game and averaged a series-best 13 points for the two-game evening.

While SAMURAI kept most of the line-up, M.I.B. added Wilson Lo (MIB #15), another younger Raimondian of Dickson’s generation and Simon Chan, but was without Chow Ming Yan and Jefferson Tong (sick). Tigers, who was without starting key-man Patrick Tse (Knee), Edward Fong (out of town) and Ken Leung, got help from the return of Dennis Chan, who missed nearly two years of Tigers’ actions, and added new faces from Aaron Chow (Wilson Chow’s nephew) and Arthur Chan (baller-friend in casual game).

The Original Four were the three teams here and G.T. Explorers. They were the first four teams of the league. M.I.B. become SPIRIT in 2010, which was the last season the team played in the League.