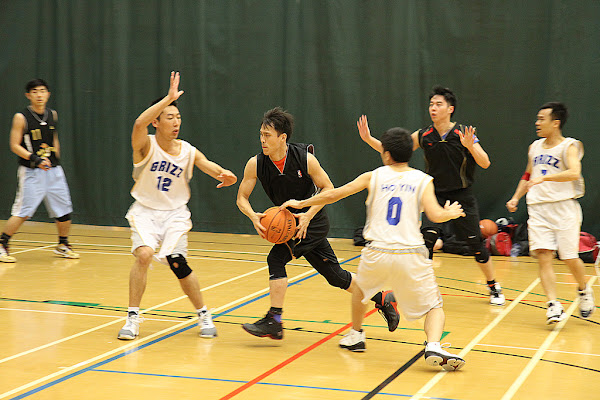 Mok Chung Ming (MAY #11) left Sunday’s first round game against GRIZZ in the first half and did not return. MA YING struggled thru three periods but with a final period collapse by GRIZZ, which concluded their disappointing season after being one of the four teams reaching Semi-Final last year, MA YING advance and will face H.F.C. in next round.

Without their leading scorer, MA YING could not show enough threat against a GRIZZ team that had only won once this year.

After scoring on one fast-break layup that put MAY up 5-4, Mok left in the first half and did not return to the game due to back spasm, an injury that was reported perhaps even during or before the pre-game warm up.

A basket by Tony Chow (GRI), the number eleven on the other side, had four points in the first period, when GRIZZ was only down 6-7.

Through three periods, both teams have the chances to pull away but neither team shot well at the free throw line.

Leo Chow (GRI #7) hit the only three pointer in this game in the second period that put GRIZZ up 9-7 and they led by as many as four 12-8 after another basket from Leo and a free throw by Yuen Chun Yin (GRI #9), but making only one of the six free throws did not help to hold the lead, not to say extend it.

Lau Siu Tung (Tony, MAY #10) would eventually step up with his game-high 12 points and saved MA YING from an unexpected first-round elimination.

Meanwhile, MA YING made a 5-0 run from a basket by Vincent Siu (MAY #6) and a free throw from Danny Ho (MAY #9), the Tony in black uniform scored the final basket in the first half as MAY took a 13-12 lead into the break. Tony had two steals and scored four points in the third period while GRIZZ struggled more but MA YING could only led by three points entering the last period.

Alvin Chong hit two points that help GRIZZ to pull within one point to start the 4th period, but the team in white failed to score until MA YING stretched the lead to nine.

Jonathan Poon (MAY #44) returned to the line-up after missing all six division games for the team, but was not looking in shape still. However, his layup in the 4th period put MA YING up by four, which is the biggest difference by MA YING until then.

Tony Chow split a pair of free throws before two from Leo as GRIZZ pulled within 21-27 late in the period but Tony Lau and Vincent did the same to maintain a cushion that last until the end of the game.

MA YING missed 22 of 35 free throws, while GRIZZ made four out of twelve attempts.

MA YING only attempted twice — both misses — from beyond the arc while GRIZZ shot 13 three-point shots but made only one of them.

The last time GRIZZ and MA YING square off in playoffs was in Semi-Final in 2010 and their respective leading scorer in that was Fu Ka Wai and Otto Chan, both did not play in this game. This is only the second time GRIZZ failing to reach second round since the team joined the league in 2007.

Leo played his 60th game in Southorn Basketball League and is the leader in number of games played (both division and playoffs included).

Each team had 10 field goals. GRIZZ recorded six assists while there was none from the other side.

Each team played seven games this year, MA YING (31.6) and GRIZZ (28.0) were ranked at the bottom two spot in team scoring.