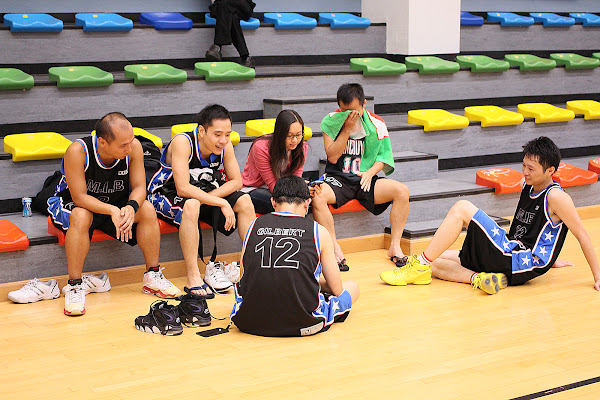 M.I.B. may be regarded as the under dog many times, and often short-handed with just enough players at tip-off. With five players all played 40 plus 5 minutes on Sunday, M.I.B. outlasted SAMURAI 64-60 to start their Original Four season 2012.

Two lay-ups by Kelvin Ng (SAM #10) sandwiched a three-pointer by Simon Huang (SAM #34) which the 7-to-nothing spurt gave SAMURAI a double-digit lead late in the third period. The Simon from M.I.B., Chan (MIB #2), scored a two-point basket and M.I.B. guard Leo Chow (MIB #17) split a pair of free throw as M.I.B. was still behind 38-31 at the end of the period.

Eric Leung (SAM #6) made sure he was not forgotten as a threat from deep, hit his second three-point shot in the 4th period to re-gain a 10-point lead at 44-34. Two consecutive baskets by Simon Chan and Dickson Chau (MIB #92), who tied a game-high 17 points, added his own to complete the 6-0 run as M.I.B. cut the deficit to four.

It still looked good for SAMURAI as they still could extended the lead again down the stretch. After Eric made his 3rd trey of the game, Simon Huang grabbed M.I.B.’s misses and drove to the basket for a layup which helped SAMURAI to re-gain a nine-point lead with 1:46 on the clock.

M.I.B. called their last time-out which eventually set up a very long one-and-a-half final minutes in regulation. These men in black are just like zombies, they never die.

Chan Ho Yin (MIB #13), added 15 points for the evening, grabbed his own miss under the rim and was fouled by James Kwan (SAM #9). After his split the pair of free throws, both team could not score in their respective ensuing possessions. While SAMURAI was facing full-court press from M.I.B., Leo stole the ball before SAMURAI could even push it to front court, and quickly made a three-point shot that cut the deficit to 49-44 before M.I.B. fouled Simon Huang to stop the clock.

With less than 20 seconds left on the clock, Simon Huang made both foul shots for SAMURAI but Dickson made a long-range basket, only the 7th time in his 60-plus SBA game history as M.I.B. climbed back to 51-47.

Kelvin split a pair of foul shots for a 5-point lead by SAMURAI but Leo made another desperate three from the top of the arc with just four seconds left and M.I.B. sent Simon Huang to the line again.

Four seconds with a 52-50 lead and two upcoming free throws from a player which just made two of them should still be a good chance for SAMURAI to seal the game. But Simon just missed both.

Ho Yin grabbed the defensive rebound and was fouled by James, then made two free throws with three seconds left that sent the game to overtime.

Simon Chan scored the first basket in overtime which gave M.I.B. a two-point lead, the first time they were ahead in the evening. But back-to-back three-point baskets by Eric put SAMURAI back in front with a 4-point advantage.

Simon Chan answered with his long basket, turned the game back to an one-point game, and Dickson made two free throws to put M.I.B. up by one again in the middle of the overtime only before a jumper from Au Chi Chiu (SAM #37) brought the lead back to SAMURAI at 60-59.

Dickson made two more free throws in the tightened minutes as M.I.B. re-gain the lead.

With less than 30 seconds to play and a chance to take back the lead, SAMURAI turned the ball over and Leo tried to dribble the ball and run out the clock with the 61-60 lead.

Chan Ho Yin drew a foul with only eleven seconds on the clock. He hit two more but was called for lane-violation in his second, still put M.I.B. up by two-points.

Simon Huang’s three-point attempt hit the front-rim, Dickson grabbed the rebound and was fouled with five seconds left. Dickson made both free throws that sealed the game.

Despite both “first-gen” Leo and Chan Ho Yin returned to M.I.B., M.I.B. is like their traditional self with only five dressed players. Other missing men in black includes Jefferson Tong, Adrian Chou and Tim Cheung.

After this victory, M.I.B. now tie with SAMURAI their in all-time series, each winning five times in their past ten match-ups. In the past three M.I.B. victories against SAMURAI, there were only six men in black in each game. Unless M.I.B. can form a team to play in the coming SBL or Flag, which looks unlikely, the two teams may only face again if there is an Original Four series in 2013.

Eric became only the eleventh players to score five treys in a single HOOPS.HK game and this is only a second time in the Original Four series. He scored a personal best and Simon Huang tied him, both had a team-high 17 points. Eric’s previous best was 12 points, which he did it five times and put up four three-point baskets in each of them.

Jonathan Lo (SAM #46) grabbed a game-high 12 rebounds before left the sports centre late in the 4th, when SAMURAI was still ahead.

Dickson first joined HOOPS.HK as an M.I.B. in the first game titled under “Original Four” in 2009, when he scored eleven points, also with one three-point shot, in a 45-42 win against also SAMURAI.

With all four team-mates scored at least 15 points, Gilbert was scoreless in 45 minutes. It is probably the first time in a single game when eight players were in double-figure scoring, and four of them with 17 points.

Jackie Lai (SAM #11) and Patrick Lai (SAM #15) did not play for SAMURAI, the brothers were both out of town.