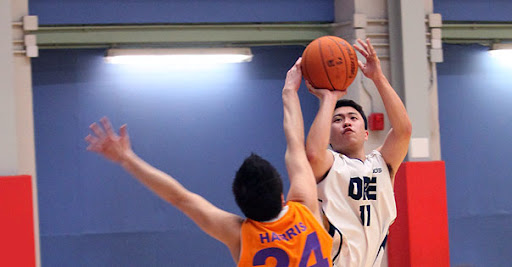 With only five players were dressed at tip-off, Photons were quickly out-played by Dream Team, who started strong with a 10-0 spurt led by Chun Hong Tsoi and Ka Wai Chiu, each added four points.

Late to the game, Harris Wong added two free throws at the end of the period but the team was still down 5-15.

Back-to-back three-pointers by Cherry Tsui and Tl Li cut the deficit to nine points and Tl  added four more points in the period when Dream Team was leading 24-16 at halftime. While undermanned, Photons do still have some advantage at the board. Grabbing nine offensive boards, however, does not help Photons in the period as they could not convert them into second chance points. Photons shot a dismal 4-for-21 in that 10-minute span.

Dream Team’s offesne cooled down a little after the break while Tl li  scored six of the team’s ten points in the third period, pulled within only three-points into the final period.

Ming Yan Tsui made a layup under the basket — his first field goal of the game — and Tl added another which helped Photons to put within one-point at 30-31 early in the 4th period, but that was the closest Photons could come to. Chun Hong Tsoi’s three-pointer, his first and also the team’s only trey, mid-way through the final period put the game out-of-reach at 37-30.

Harris Wong grabbed a game-high 11 rebounds and added six points. He was late to game and early to leave as he was fouled out in 4th period.

After a 0-12 performance, Ming Yan was 1-for-ten from the field, both in loss.

Seung Lung Chin missed 10 of this 13 attempts from the field and 5 of eight from the line but had nine-points, three steals and two rebounds and assists apiece.