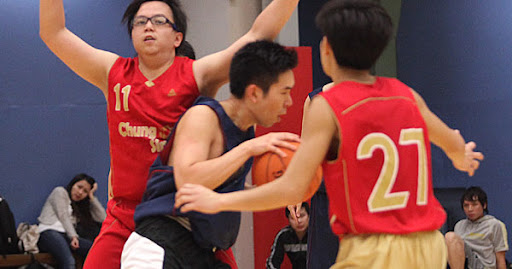 Down by three-point early in the final period and seeing Michael Chan left the court briefly after his ankle mildly sprained, Benson Kwong scored all his six points from the field and Alex Li had four in the span which helped to snap a three-game losing streak for D.S.F. in a 44-38 victory over Chung Sin, which is still win-less in four games.

Chung Sing had their usual starters on the bench at tip off, but after seeing a 10-3 run by D.S.F., Dickson Chau returned to the floor and scored five points in the first period when D.S.F. led 12-8. Michael’s basket from deep put D.S.F. up to 22-10 early in the second period, the biggest lead in the game, and it seems the game is just like another usual dominance by D.S.F. over the undersized Chung Sing.

Also coming off the bench, Lok Ming Sin scored the team’s first twelve points in the second period, including two three-pointers, which helped to cut the deficit to two. Michael’s three-point play extend the lead back to five but was only matched by Wing Yin Luk who hit another three-pointer before halftime.

Michael was perfect from the field in the second period and scored 10 points.

Wing Yin Luk tied the game with his second three-point shot and baskets by Ming Yan Chow and Dickson put Chung Sing to a four-point lead, their only lead ever in 2010.

Mike Tse tied the game for D.S.F. at 30-all after finishing a three-point play, but Chung Sing would still hang on with a 31-32 lead into the 4th period.

After leading 34-31, Chung Sing cannot sustain the advantage and a basket under the rim by Benson followed by a quick jumper from Mathew Wong brought D.S.F. back ahead, despite a brief leave by Michael on bench due to sore ankle. Michael did return and added one more point from the line.

Two points from Wing Yin Luk helped Chung Sing to pulled within 36-47 but Benson scored four more points down the stretch and Alex Li added two more for a 44-38 victory, a first one for the team in 2010 after losing three straight games.

Averaged in double-digit scoring in the previous two seasons, Lok Ming Sin only scored over ten points the first time in five games. He scored his personal best 21 points in a loss to D.S.F. last season. After missing all five three-point attempts in his season debut, he connected 4-11 from deep and made at least one in the past three games.

Michael scored in double-figures for three-straight games and just accumulated 350 points since he joined the league. His 116 free throw made is a league-leading record.