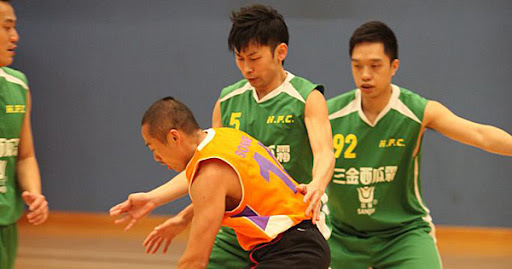 The last game on Sunday was a close one with 11 lead changes and 13 ties, along with a controversial call which helped to send the game to overtime.

While both teams with their top players fouled out in the extra period, H.F.C. managed to win its third game in a row by an 50-44 overtime victory over Photons, who had only six players dressed for a second straight game.

Quick guard Alex Chan helped Photons to start the game with a high pace that apparently was not matched by any player from H.F.C. and his five points, including a three-point play to begin the game, helped Photons to build a 7-0 lead early on.

H.F.C. had its own run started by Colin Wong’s three pointer and ended by Tabo Chak’s basket which put the team to a 9-7 lead only before Ming Yan Tsui tied it.

Harris Wong made two free throws in the second period coming off the bench and the two teams had six lead changes with two ties until Andy So’s second basket from deep that gave H.F.C. 23-21 lead mid-way through the second period.

Tl Li and Tabo each made two free throws before halftime, when Photons was still down by two points.

Both teams slowed down after the break, when each team scored only six points. Everytime Photons tie the game, H.F.C. re-took a 2-point lead.

Ming Yan’s basket early in the 4th period put Photons to a 33-31 lead, but Shawn’s second three-point basket in the game re-gained a one-point lead for the team and his third trey extended it to 39-35.

After Harris’s three which pulled within one again, he stole the ball from Shawn. Cherry Tsui missed a three-pointer, Ming Yan grabbed the miss but missed his layup. Tl got the ball and his basket give Photons a 40-39 lead with less than a minute to play.

After being fouled, Patrick Ip made the first free throw which tied the game at 40-all but missed his next that would have given H.F.C. a lead, and Harris grabbed the rebound for a final possession before regulation end.

With less than 10 seconds to play, Ming Yan lost the ball to Andy Ching, who cannot control it after apparently hit from behind mildly where no foul was called. The ball was thrown to the floor of the front court only until Colin tried to grab it before it goes out of bound. Referee’s whistle seemed to blew before Colin or the ball touch the baseline and H.F.C.’s bench were heated with words towards the referees.

With less than 8 seconds left, Photons threw-in the ball but Cherry could not made the basket as the game went overtime.

Alex’s layup tied the game at 46-all in the middle of the extra period. Andy Ching caught a pass near the rim while looking to score an easy basket, the shot was blocked out-of-bound by Ming Yan.

Harris grabbed the next missed basket but the ball was stolen by Tabo under the basket. Tabo was fouled and Harris needed to leave game as it was his 5th. Tabo made both free throws for his game-high 16 points and Colin Wong sealed the win with a fastbreak just before the game end.

Alex was fouled out after Harris did and Photons had only four players on the floor in overtime for the last possessions. Ming Yan tried a potential winning three-point shot.

Ming Yan Tsui had collected at least three offensive rebounds in 11 straight games, an active streak which is also a league record. He also had three straight games with 10 or more rebounds. But the forward has not come out from his shooting slump yet, with the exception 68-2 game against G.T. Explorers, he is making only a dismal 5-for-41 field goals this season.

Tabo accumulated 423 points and is on pace to reach 500 before the end of this season should he keep his scoring average and H.F.C. advances to final.

Photons only lost three games in a row the second time.  Their next and final opponent before playoffs is SPIRIT, which lost in the same evening and dropped to 0-4.

It was the second overtime game in 2010 and eleventh of the league.

Both teams complained no-call for fouls, in a game already with three players fouled out.