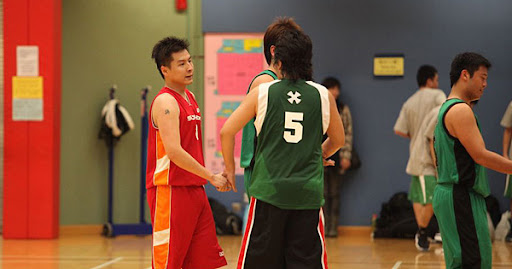 Ken Leung’s personal best 11 points with 3 treys, along with also 11 points from Ben Cheng and 10 by Benny Wong were spoiled in another loss to Trojans, who also had three players scored in double figures. Jerry Lee and Michael Lau each scored 11 points and Mike Mak added 10 as Trojans defeat Tigers 57-44 and remain the only unbeatern team in FLIGT Division other than MA YING which has played only two games.

Jerry Lee and Mike Mak started the game with a 5-0 spurt, but Ken made his first two attempts, both from three-point range in the first period and cut the lead to 8-9. After Leslie Cheung split a pair of free throws which capped another 5-0 run for a six point advantage, SOUTHORN Tigers had their own run capped by Ken’s third trey before the end of the first period which tied the game at 15-all.

Ben score the first six points for the team and took a lead at 21-20 in the ensuing period.

After hitting a three pointer, Benny was fouled from deep and made all three free throws, and his fastbreak layup off another Trojans turn-over put Tigers up 29-20.

Edwin Lai and Michael Lau each scored two points before the break, when Trojans was behind 24-32.

While the Tigers cooled off, Trojans get their momentum back in the third period. Capitalized by six turnovers in that span, Trojans made a 10-2 run ended with Michael’s basket which tied the game at 34, and each team exchanged a free throw by Wilson Chow and Mike to tie again at 35.

Ken’s lay up cut the deficit to 41-45, just it was the closest Tigers could get the rest of the game.

It was the first game Patrick Tse and Will Kam, who both left Tigers to Trojans as the later just join the league, to face their previous team. Will was scoreless but added four rebounds and two assists. Patrick was 3-for-4 from the field for six points, added four boards and assists apiece and made two steals. Patrick, however, also committed a team-record ten turnovers, six of them in the second half.

SOUTHORN Tigers had 13 assists on 16 field goals. It was two assists shy for tying the team record 15.

Both teams made half of their free throws and shot over 40 percent from the field.

This is the first game this season when two teams combined to score more than 100 points. The 101 points combined was fifth among the list and was 4th without overtime.

The previous high in turnovers by Tigers is 8 from Benny in last year’s playoffs which was against Trojans.