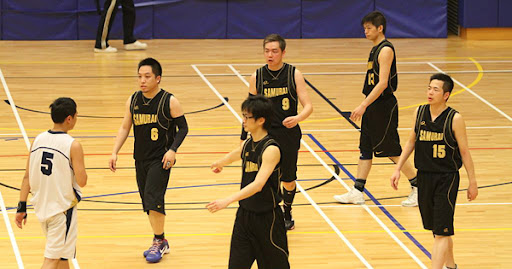 Rallied back to take a lead, SAMURAI collapsed in the final period when they allowed 19 points from Dream Team, which is back in champion form and took a 48-35 victory for a second straight win.

Seung Lung Chin (Leo) scored the most points at Western Park on Sunday with 16, Chung Hong Tsoi (Kevin), who was perfect at the line and added 15 points and eight boards, Man Chun Chow had 13 and five steals as the Dream Team’s version of “Big Three” led the defending champion to its third win in the rough season.

Started by Leo’s two three-pointers, and ended by one from Kevin, Dream Team’s 12-3 run at game start looked as dominating as ever for the winner last year. They cooled off a bit and allowed SAMURAI to use a 5-2 spurt that close the first period down at 8-14.

Back-to-back three point shots by Eric Leung in the second period put SAMURAI back to 14-18, but Man Chun Chow, the scoring leader 2009, answered by his own trey and five Dream Team’s points. Dream Team was up 23-16 at the break.

The lead evaporated in the ensuing period.

SAMURAI continued to ride on Eric’s stroke, his 4th trey in the game cut the deficit to only three, and Jackie Lai scored four points in the mix of a 12-2 which put SAMURAI up 28-25.

Jackie and Holman Kwan added four points early in the 4th period but SAMRUAI were still down 35-32, and they did not look like they could score again. The defending champion scored the game’s next nine points from beyond the arc, the foul line and layup and the two time-outs by SAMURAI in between could not just stop the scoring machines from extending the lead to twelve with just a couple of minutes left.

Jaiphen Hsiung was the only scoreless SAMURAI but had four rebounds. Eric Leung tied his personal best with four treys in a single game.

Jackie Lai followed well to his personal scoring trend, with double-digits only in alternate games six times this season. The guard-forward is averaging a personal best 10.7 points and lead also rebounds (7.8) for SAMURAI.

Chun Hong Tsoi scored 11 or more points and made at least one trey in four straight games. He made 5.6 free throws on 7.8 attempts at the line in the past five.