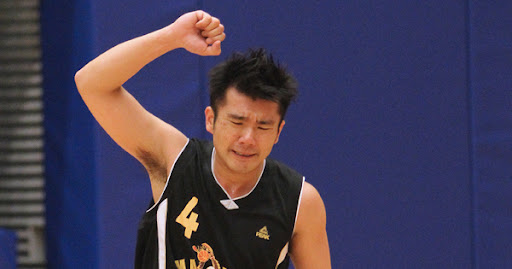 Ivan Shiu had a double-double, but MA YING may drop to even 5th place if they lose their next game after failing to get a chance to top FLIGHT Division. Behind 12 points from Mike Mak and 10 from Jerry Lee, Trojans clinched the first position in division after a 46-35 victory.

Beating T-REX (4-2) earlier this year, a victory for MA YING in this game would give them their 4th win and a position to challenge for a top seed. They just cannot do it without 15 points per game from Chung Ming Mok.

MA YING has been struggling through out the first half. Lewis Lau made a basket but could not finish a three-point play. That basket tied the game at 2-all just minutes into the game, but the tie was the closest MA YING could come and that was also their lone goal made in the period.

While holding the opponent to one field goal, in fact, Trojans was not shooting well either. After Mike Mak’s basket that break the tie, he added only two more and Jerry Lee hit another for just a 8-2 to close the first period.

The scoring was not seen by Trojans all year in this first period, just come again right in the second.

Ivan scored MA YING’s second basket but it was already a 4-15 deficit. Mike Mak scored the team’s final six points before half-time which extended the lead to 23-6.

Mike Yau scored two points after he grabbed an offensive board which put Trojans to a 19-point lead, the biggest in the game, in the middle of third period.

Started and ended by a free throw each from Ivan Shiu, MA YING made a run before Trojans called a time-out. Ivan hit one more free throw for 19-31 only Mike Yau put Trojans to a 14-point cushion just before the 3rd period ended.

Both teams tried to run a bit more in the final period and they exchange baskets for some stretches. Simply MA YING could never cut the lead to single digit again and dropped their second loss to the unbeaten Trojans.

Ivan had 11 points despite but five missed free throws on eight tries. He had a double-double with 13 rebounds and added two assists.

Both Leslie Cheung, Edwin Lai and Sunny Wong, the three “biggest” Trojans or kind of a version of “big three”, did not play.

Since routed by Dream Team on Mar 29 last year, Trojans win nine of its next ten games. The only loss in that span was in a Semi-Final game, against the then-champion, again, Dream Team. Trojans were eliminated in playoffs in the past two seasons both by Dream Team and was 0-3 all-time.