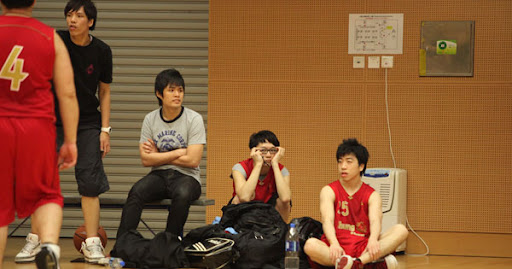 Facing the division leading Trojans, Chung Sing fought hard enough to make it a game for three periods but still fell short to make playoffs after a 34-50 loss which ended the team’s 2010 season.

Both teams were not just as hot in the beginning.

Scoring the first points in the game and led for twice in the first period, Chung Sing looked like they are really giving what they could to fight for a last chance to make playoffs.

Elvin Tam added three-points before Lok Ming Sin scored five points that put Chung Sing up 8-5, but a free throw from Edwin Lai and lay up by Mike Yau tied the game before the first period end.

Wing Yin Yuk begin the second period with a three-point shot that put the team in red to 11-8, but William Yim’s trey concluded a 5-0 spurt and helped Trojans to take back the lead at 13-11.

Two more lead changes followed but Trojans gradually pulled away and had a five-point lead at the intermission.

William hit from deep and Mike Mak’s two pointer put Trojans up by eight again, just the young kids had not yet given up. Elvin’s three-pointer cut the deficit to five again at 33-38 with three more minutes left in the game.

However, a few turnovers led to fast-break points for Trojans and the division leader just pulled away with a 21-point 4th period and scored another 50-point game.

The three Mikes — Michael Lau, Mike Yau and Mike Mak — each added eight points and combined for nine of the team’s 16 assists in the game.

In the middle of the 4th period, Michael Lau was called for an unsportsmanlike foul against Kwok Fu Chung as he tried to stop the Chung Sing forward from moving the ball to front court.

Jerry Lee scored 11 points but had his streak of at least one trey snapped at 10 as his missed all his four attempts from deep.

Dickson Chau took the floor late in second period but had to leave early in third as his pair of glasses broke when he got fouled. The forward could not return to play without it. Ka Hang Yip substituted and made one of the two free throws.

D.S.F. can make playoffs only with a tying record but winning the head-to-head match up against Chung Sing.