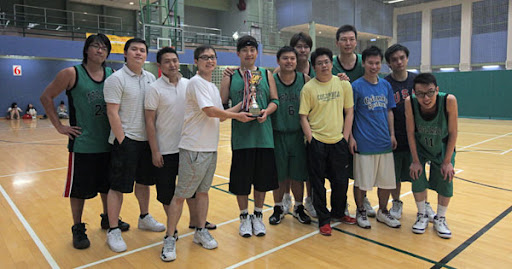 Jerry Lee scored 11 of his 24 points in the 4th period and helped Trojans to become SBL champion for a second time.

Never known to be good at the line, Ivan Shiu started the game by making two foul shots for MA YING.

Despite the disparity of offensive boards where Trojans had seven compared to MA YING’s none in the first two periods combined, the close-game continued and Trojans had a brief 4-point lead early in the second period.

After Siu Lung Cheung’s basket that put Trojans up 16-12, Chung Ming Mok, the league’s leading scorer made five to cut it to an one-point game at 17-18. Tony Lau and Otto Chan each added one free throw and MA YING led 21-20 at half-time.

Jerry’s first trey in second half tied the game at 23-all and the teams exchange baskets through out the period. Five more lead changes in that span, the game was tied again by two free throws from Mok, and a time-out was called.

Trojans went on to make four more points before the end of third period for a 37-34 lead.

Otto made a free throw and scored two points in another possession to cut the deficit to 37-39, but Jerry hit his 4th three-point shot to re-gain a five-point advantage.

Before seeing Jerry’s fifth trey, Otto made two free throws and cut the game to two points but would see if become a five-point game again at 45-40.

Tony’s basket helped MA YING to pull within 42-45 with more than two minutes left but that was the closest MA YING could reach. A couple of costly turnovers down the stretch prevented them to score and at the same time giving up fast break baskets for the opponent and ultimately letting the chance become the winner go away.

Jerry’s 24 points is the highest points scored this season by any player not against G.T. Explorers and he is the 3rd player this season and 5th in all-time to make 5 treys in a single game. Chun Hong Tsoi was 4th as he did the same in the 3rd-place game earlier in the afternoon.

Chung Ming Mok had nine points and dropped his average to 13.6 in eight contest.

MA YING shot 13 for 20 at the line, where Trojans was 5-for-9 in this game. All four MA YING starters had four attempts from the charity stripe.