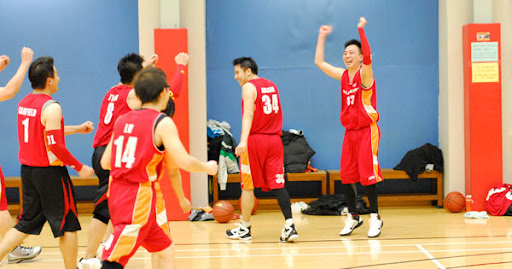 Down 36-43 with one minute left, Benny Wong hit two three-point baskets and Ben Cheng put back a miss with four seconds left as SOUTHORN Tigers avoided a loss in the team’s season opener.

Benny scored the team’s first five points, but Tigers were down 5-14 in the middle of the first period.

Two baskets from Ben helped to cut the deficit but Tigers were still down by five points at the end of the first period. The team slowly clawed back and a three-point play by Ben helped Tigers to take back a lead at half time with 21-19 on the score board.

Benny swished a three-pointer after the break, but D.S.F. tied the game 21-all as they have little resistance from Tigers, who went cold afterwards.

Penny Ng’s basket near the end of the third period helped D.S.F. maintain a 4-point lead entering the final stanza.

Benson Kwong continued to power under the rim for two more goals in the 4th period and Michael Chan scored two more points for a seven-point lead with about a minute to go, when the lead looked comfortable.

Benny’s fifth basket from deep cut the lead to only one point with 41 seconds left, and D.S.F. forward Michael Chan missed a jumper before Adrian Chou grabbed the rebound for the team’s final possession.

Adrian’s try was off target but Ben, again, grab the offensive board, and this time he put it back to the basket for the final one-point lead with four seconds left.

Penny grabbed the final in-bound pass, dribbled past mid-court and try to make a running jumper for the win.

Only Patrick Tse had his hand on the ball of this shot to ensure it would not touch the rim as time expired.

Benson Kwong had 10 boards and rebounds for his first double-double and is one rebound shy for reaching two hundred.

Benny tied his personal record of making five 3-point shots in a single game and is leading all-time with 71 in the League.

Michael continued his outstanding play, scored 15 points and grabbed seven boards after a 16-8 effort in previous game, but D.S.F. lost both games. He has now made 129 free throws, eight more than any player in the league. He became the only other player to reach the 400-point mark  in the middle of the third period and is second in all-time scoring.

While Tigers played without starting centre Chi Wing Chow and forward Terence Chan, D.S.F got only five players dressed. Former M.I.B. and SPIRIT Chi Fu Yuen has yet to play his first game for D.S.F. with injury.