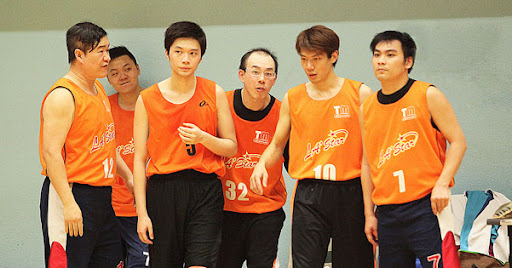 LA Star failed to make free throws to keep and extend their lead early, but they hung on to get a first victory since joining the League.

Coming off two losses already, LA Star failed to make a single field goal in the first period of their third game, when all seven shots were missed, committed four turn-overs and had only one rebound from the offensive end.

Meanwhile, SAMURAI started the game with a 9-o run, and things were looking like easy in the first ten minutes.

Jackie Lai and Dickson Chau combined for only seven points in the previous game, but this time, they totaled six points in just the first period, when Huey Lin scored the only two points from free throw line for LA Star.

The scores reversed in the next period.

Despite missing all of their six free throws, LA Star tied the game after Penny Yau’s basket which capped a 9-2 run. Keung Siu made both his foul shots for the lead to conclude the scores in first half with a two-point lead.

LA Star made half their shots in the second period for 11 points while holding SAMURAI to only two free throws.

SAMURAI was better at the line. After Horace Wong and Patrick Lai exchanged baskets, Patrick and Dickson combined for four straight free throws and Jack Chiu’s three-point play pushed the lead to five before Ka Shing Siew made a long basket to cut it at 18-20 entering the last period.

While SAMURAI was better in odd periods, LA Star was in the even ones. And the 4th is the most important.

Keung, who led all scorers of the game by 11 points, tied the game twice for LA Star, and he hit a foul shot later which took the lead back at 23-22.

Missing three of the four free throws in the period, Keung made two down the stretch and kept a 3-point cushion for LA Star before SAMURAI had a last time-out.

In the ensuing possession, instead of trying a potential game-tying three-point shot, Patrick drove past defenders from the left and scored an layup near the basket. SAMURAI down by one with seconds to play.

William was fouled right he got the throw-in but missed both free throws. Ka Ming Wan grabbed the rebound and passed to Patrick, who missed a final attempt with frustration seeing SAMURI losing two games in a row.

Jackie was fouled out without scoring again in the last three periods, and James Kwan got his 5th foul that sent William to the line.

Huey was called for an unsportsmanlike foul in the first period when Patrick stole the ball and run for a fast-break lay-up.

Jack was excited after being fouled and got an and-one and he played a bit Wing Chun at the free throw line before he finishes his three-point play in the third period.

26 of the LA Star’s 32 came from reserves while their starters matched SAMURAI’s six bench points.

SAMURAI had played in six games in team history which are decided by two points or less and they lose all of them.