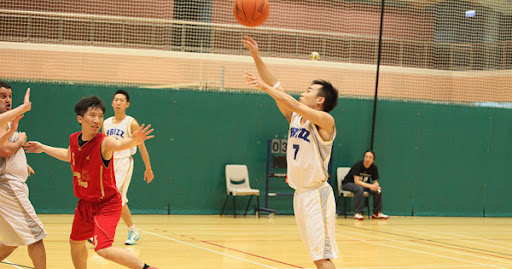 Leo Chow hit a game-tying basket at the buzzer, sent the game to over-time and GRIZZ won its third game in a row in a 44-37 over-time victory against Chung Sing.

Chung Sing led 36-34 with seconds left when Elvin Tam missed two free throws. Terry Suen grabbed the rebound, passed it to Roger Mahmud, who threw a long pass to the front court where Leo caught it. Leo made the catch-and-shoot right at the buzzer and the flight for three wins in a row by Chung Sing was delayed.

In fact, it was known to be cancelled few minutes later.

In the middle of the 4th period, Lok Ming Sin was fouled after his three-point shot swished through the net and he made the ensuing free throw to finish the four-point play which gave Chung Sing a 32-26 lead.

But Ho Yin Chan and Leo climbed back from the hole with two three-pointers each, the game was tied at 32-all.

Elvin’s basket was answered by another from Ho Yin Chan that tied the game again. Wai Yip Mok scored two points to take a lead again while GRIZZ failed to score and Elvin was fouled with seconds left in the regulation.

Leo scored the first basket in the extra period for a lead before SLM cut it to one as he split a pair of free throw.  This free throw turned out to be the only point Chung Sing could score as GRIZZ carried the momentum from the buzzer beater to win this game.

With Ryan Murphy and Roger, GRIZZ still could not take their size advantage and even grabbed one less rebound than the young squad. But they forced Chung Sing to 22 turnovers which cost the later this game.

Roger injured his right elbow when chasing for a loose ball with SLM, who was called for an unsportsmanlike foul late in the 4th period. It was the only personal foul by the Chung Sing guard.

SLM scored a game-high 16 points by making five of eight attempts including 2-for-3 from beyond the arc.

Ming Yan Chow dislocated his ring finger near the end of regulation and did not return.

Chung Sing was 6-6 at the line but missed three of four in the last seconds and over-time.

Leo led all GRIZZ with 13 points, Ho Yin followed by 11. Terry Suen added nine points including a three-pointer in over-time.

In three games this year, Chung Sing would have tied the total number of wins in their past three season should they have won.

This is the 248th game of the league and marked only the 13th time a game went into over-time.