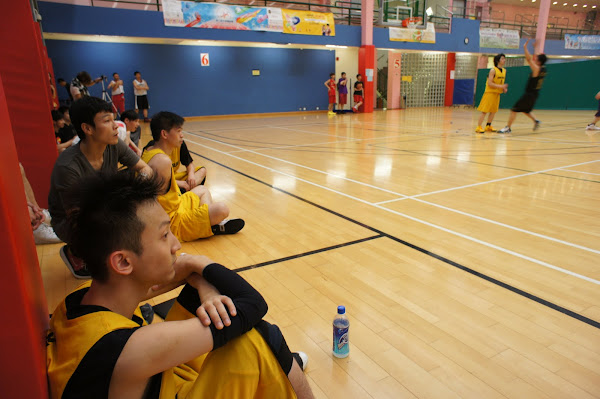 SAMURAI is on brink of elimination from play-offs after losing to D.S.F. 28-32 and dropping to 1-4 on Sunday.

Michael Chan (#12) scored seven of his game-high 15 points and grabbed five boards and Sunday and helped D.S.F. to improve to 3-3 after the last of the six division games is over.

Benson Kwong (DSF #8) scored the game’s first point by a free throw, but SAMURAI’s strong rebounding and high percentage shooting resulted in a 8-0 spurt. Michael made a free throw later in the period which cut the deficit to 6-8 before both teams struggle to score for a while through start of second period.

D.S.F. broke the scoring drought by four free throws, two each from Michael and Alex Li (#10) that concluded a 6-0 run and turned the two-point deficit to a four-point lead.

Dickson Chau (SAM #7) and Patrick Lai (SAM #15) scored two points each to start the second half and Mark concluded a 6-0 run that put SAMURAI up by two points again, and the game is close for the next ten-plus minutes when neither team could get away from each other for more than two points until the middle of the 4th period.

Holman Kwan (SAM #3) got his 4th foul  and Mark was called for his 3rd a moment after which gave D.S.F. the chance to take more control of the game.

Dickson closed the 3rd period with two free throws for a one-point lead but Michael re-gain the lead in the 4th period with two of his own. Dickson later hit two more free throws which tied the game at 25-all, but SAMURAI could not contain Michael, who scored the much-needed points down the stretch which put D.S.F. up 30-26 with about two minutes to play.

After making the lone attempt for two points in the first period, Jackie Lai (SAM #11) missed his next attempts but had five boards and three steals in the game. Holman tied a game-high with seven rebounds before fouled out. Jefferson Tong (#8) was 0-2 from the field.

All 4th-period points by SAMURAI were free throws.

D.S.F. went through a roller-coaster season when they lost three games in a row before taking three wins afterwards. With a victory by Tigers over Chung Sing in the another game of the day, all three teams are 3-3 and D.S.F. ranked last among them and confirmed a 5th place as they lost in both match-ups against them.

LA Star (1-4) win tie-breakers agains SAMURAI (1-4) and both teams have one game left. A win by LA Star or a lose by SAMURAI will put SAMURAI out of the play-off picture this season.