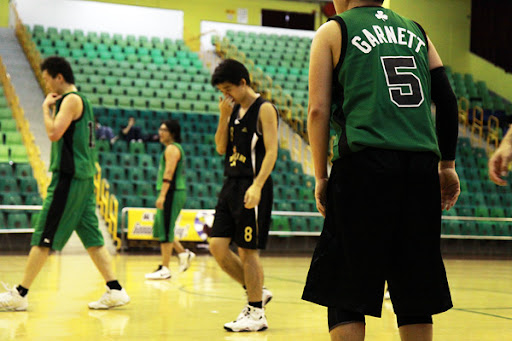 Trojans took a lead in the final minute and beat MA YING 37-33 in the re-match of last year’s Final and become champion for a second straight year and the first team to do it thrice.

Trojans scored the game’s first points, but Chung Ming Mok (MAY #11) completed a three-point play for a 7-5 lead that was kept until the end of the first period, when both teams were playing at a relatively slower pace than usual.

Things changed a bit in the ensuing period, when Trojans re-gain some control of the game.

Leslie Cheung (TRO #13) was sent to the line three times despite only making two of the six tries. Followed by baskets from Siu Lung Cheung (TRO #23) and Jerry Lee (#5), Trojans took a three-point lead entering the half-time break.

After Otto Chan (MAY #2) stole the ball from Trojans and ran for two fast-break points, Vincent Siu (MAY #0) had a blocked shot against Trojans in the next possession to keep the deficit at one. Vincent missed an lay-up later, but Ivan Shiu put it back as MA YING took a 18-17 lead less than three minutes into the second half, but Siu Lung Cheung scored a turn-around jumper under the rim to take the lead back in just the next possession.

Neither team could score in the final minute of the 3rd and MA YING took a 27-26 lead entering the final period.

Only three baskets were made in the next four minutes, and two of them came from Trojans that resulted in a 30-29 lead for the defending champion.

Facing a double-team near the basket, Jonathan Poon (MAY #44) found a cutting Vincent Siu (MAY #0) for an open lay-up and it was followed by Otto Chan (MAY #2) swishing a jumper with three and a half minutes left, when MA YING had a 33-30 advantage.

But MA YING just could not sustain the lead.

Mike Mak (TRO #6) failed to complete a three-point play but did cut it to an one-point game with less than two minutes on the game clock.

MA YING ended their next possession by a turn-over after throwing the ball to the base-line, giving a chance to Siu Lung Cheung, who drive for a tough lay-up to put the team in green up by one again with a minute left.

Tony Lau’s running jumper could not even touch the rim as Mike Mak grabbed the miss, and Trojans centre Leslie Cheung banked in a mid-range jumper with just less than 30 seconds to go.

Not known for long range jumpers, MA YING did look clueless in the final possession, when they might need either a game-tying three or a quick two-point shot with time running out.

MA YING could only foul after Otto threw another air ball with seconds left and Trojans made one more foul shot to seal the game.

Trojans will keep the trophy for good as the first team to win SBL champion three times.

Including a trip to the Final in 2008 as a Photon, Ivan Shiu tried to be champion three times but all failed.

Jerry Lee had a quiet six-point afternoon and is seven points shy to reach the 500-point mark.