GRIZZ Come Back but Fell Short 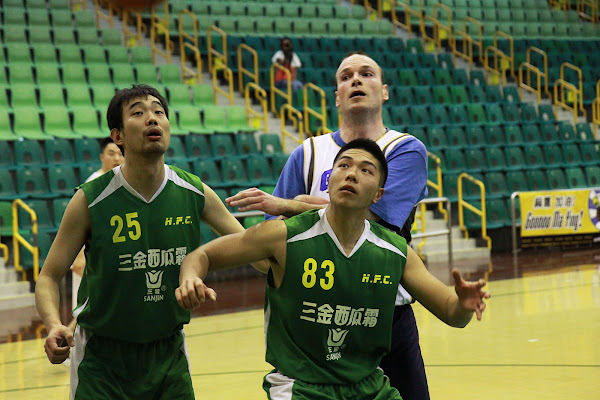 H.F.C. blew a 14 point lead, but hang on and overcame a later rally by GRIZZ to become the 2nd Runner-Up of Southorn Basketball League 2011.

One of the first few teams played since 2006, H.F.C. was one of the first two SBL teams to take the floor on Sunday at Southorn Stadium. Together with GRIZZ, both teams started very slowly, which nobody would know it was a result of their 3rd-place game defence, or the hype of playing at one of the biggest indoor basketball courts in Hong Kong.

Terry Suen (GRI #12) scored the only basket of the period for his team, as H.F.C. held the opponent to only two points in the first ten minutes of the first SBL game at the venue.

The second period was a nightmare to GRIZZ, who was only beaten twice in 2011 entering Sunday.

Tony Chow (GRI #11) scored two of his eight points to start GRIZZ’s second period scoring, but he and Leo were the only two players who could put the basketball ball through the rim before the half-time break.

After missing all five attempts in the first period, Leo Chow (GRI #7), the team’s leading scorer, missed another four tries until he hit two points on this 9th try.

H.F.C. might have been loosen with a 14-point lead into the half, and their over-confidence almost have failed them for the 3rd place of the season.

Facing the double-digit deficit, GRIZZ did not sound like they want to give up yet. Off from turn-overs by H.F.C. Leo and Tony each ran for fast-break points, and Terry’s basket helped to cut the it to 12-22.

H.F.C. continued to struggle, and at both ends. The former champion had only two baskets from the field in the 3rd period while missed other 12 attempts, and five different players were responsible for turn-overs in different situations, letting GRIZZ to crawl back gradually.

Terry and Leo each scored four more points to cut the deficit at 22-24.

Tabo Chak (HFC #92) put H.F.C.’s lead to four when he scored his only second basket in the game, but Leo’s long range jumper swished to turn it into an one-point game.

Nikko Kwok (HFC #83) missed twice in the ensuing possessions but Patrick Ip (HFC #33) got the offensive board before Tabo drove to the lane for the basket and was fouled. He finished the 3-point play to re-gain control with a 30-27 advantage.

Nikko hit another basket against Ryan with three minutes left in the game when H.F.C. took a 34-27 lead.

Ryan split a pair of foul shots and Tony blocked a shot from Tabo in the next possession, Tony then went on for the fast-break and got fouled before he made one of the two free throws which cut the deficit to five points.

Colin Wong (HFC #7) had missed four free throws down the stretch but GRIZZ could not capitalized. After Leo throw a mid-court attempt, the red light behind the glass turned on the H.F.C. would leave the game with a third place of 2011.

Nikko had 15 rebounds for his third double-double in 2011 and seventh time in the league. His average points dropped slightly to 13.8 but was good enough to be the top scorer in the season.

Leo scored a game-high 13 points but was a dismal 5-for-25 from the field, including missing 13 of his 14 attempts from beyond the arc, which was the third game of the league on the “new line” after the Lockhart Road Sports Centre game.