Spartans pull away in second half, beat GRIZZ 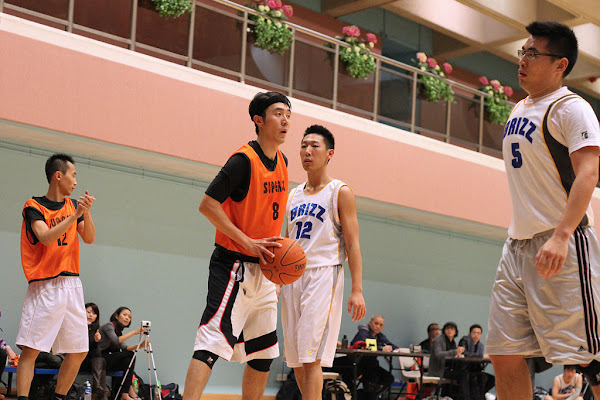 Another semi-finalist last season also lost their first game of this year but GRIZZ was beaten by a new team Spartans 34-29.

GRIZZ had the game early going, with Leo Chow (GRI #7) scored four points followed by a three-point basket from Terry Suen (GRI #12) which put GRIZZ up 9-to-4 in the middle of the first period.

But Spartans managed to have two baskets from Lim Kin Hang (SPN #15) and Lai Ngai Fai (#14) and was down only 8-9 entering the second period.

Chan Ho Yin (GRI #0) got hot with three straight baskets which helped extended the lead to 17-10, but GRIZZ again cooled down while Spartans had a 7-2 run to close the first half at 17-19.

With five of their 14 turnovers in the period, GRIZZ attempted all but three times from the field at the three-point zone and missed them all. Yuen Chun Yin (GRI #9) and Lau Wai Man (GRI #17) were the only scorers in this span, when each of them split a pair of free throws and combined for all the team’s two points.

Spartans, in the mean time, did not let the opportunity go. Wan Kong (SPN #10) scored eight of his team-high 11 points in the period and stretched an eight point lead for the new team this year.

A basket from Chan Tik Kei (SPN #13) in the middle of the final stanza put Spartans up 33-24, the biggest margin of this game.

Ryan Murphy (GRI #50) scored his only and the team’s final basket as GRIZZ got 29 points for the game as Spartans hang on with victory in ther first ever game in the Southorn Basketball League.

GRIZZ made only four of the 13 free throws in only the 4th period.