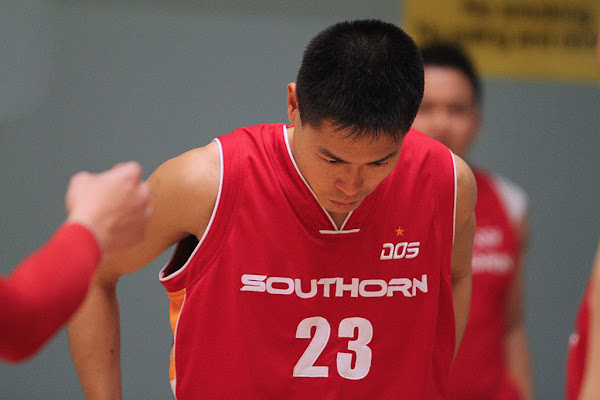 For the first time since joining the League, Chung Sing beat SOUTHORN Tigers and beat them hard, handing the team in red a loss facing a deficit as large as twenty three.

A 23-point deficit is till too much for any number 23 outside Chicago to handle.

Stephen Tsang (SOU #23), former Challengers leading scorer, scored a game-high 14 points with ten in the final period, shot 7-on-13 from the field and added five boards plus two assists for his new team, but his new teammates were off right from the beginning.

Poor defense and lack of athleticism could not help the veteran team who were not only bothered by injuries but also on the wrong side of the hill already against the youth that are supposed to be going up. Furthermore, 16 first-half turnovers made the situation even worse for them.

Benny Wong (SOU #7) made a three-point shot before the end of first half but it only turned a 23-point deficit, the biggest margin of the game, to twenty at the break, when Tigers got only eight points while allowed 21 points only in the second period.

Dennis Chang (CHU #4) had five points and three rebounds from the bench against one of his former teams.

Started by Stephen’s consecutive jumpers and capped by a second trey from Benny, Tigers used a 15-2 run which cut the deficit to 36-40 with about a couple of minutes to play, but Chung Sing hang on for a nine point victory as game time expired.

Ken Leung (SOU #14) scored the game’s first but also his only point, the guard made one of the four attempts at the line. The Tigers were their usual self with a dismal two-for-thirteen at the charity strip.

A double foul called on Lai Wing Kin (CHU #27) and Benny Wong in the final period handed Lai his 5th foul. The new face for Chung Sing had four points and five rebounds.

All five players from both team checked in at the start of the 4th period while SOUTHORN Tigers got the possession. But the five Chung Sing were standing on the wrong side as they saw Stephen got the throw-in pass in the front court and scored when Tigers still down by 38-21.