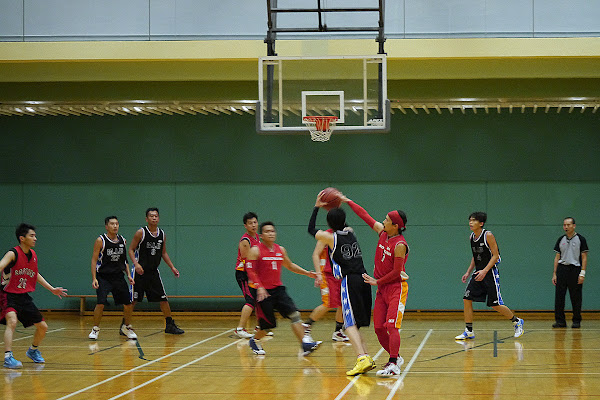 M.I.B. certainly want to have less players again, as they lost 35-41 to SOUTHORN Tigers in a game where there were more than six men in black. While M.I.B. is not hopeless for winning O4 since they beat SAMURAI in previous game, two victories would not only prevent Tigers from being the bottom team like last year, but also a chance for them to win it all again.

SOUTHORN Tigers was relatively short-handed. These men in red had been relying on Wilson Chow (SOU #9) and Dennis Chang (SOU) to defend the paint every year in the Original Four series, but neither were available for the game this afternoon.

A long-time-no-see face may help. Dennis Chan (SOU #5) has not play for Tigers since last year the same time, but he wasn’t as rusty as others might have expected. He was scoreless and no rebounds as a forward, but his passing (one assist and turnover apiece) and presence surely helped the depleted team.

With three players grabbed seven or more rebounds, M.I.B. did have an advantage on the glass, out-rebounded the no-big-men Tigers 34-26. But Chow Chi Wing (SOU #21) stepped up for the reds, scored seven of his game-high 11 points in the first period alone. The forward-centre made all his four field goal attempts without a miss.

Seeing no bigger players from the Tigers bench, Wing has played extended minutes but managed to dominate the paint. After Arthur Chan (SOU #26) made a three-pointer, Chow Chi Wing made two free throws for a 15-7 advantage before finally taking the bench late in the first half.

Without a true centre against them, M.I.B. found it easier to cut the deficit in the middle of the second period. Jefferson Tong (MIB #8) had six of his game-high nine points in that span.

Edward Fong (SOU #1) scored back-to-back baskets for Tigers which helped to sustain a 19-13 lead in the middle of the second, he also assisted for a three-point shot by Benny Wong (SOU #7) that turned the lead to eight points again at 22-14.

M.I.B. used a 4-0 run by Simon Chan (MIB #2) and new young face Chris Shum (MIB #4), who made baskets near the rim and close the first half with only a four-point deficit.

Tony Chow (MIB #23) extended the run to six as he made his first basket in the second half which cut the Tigers’ lead to only 22-20.

A hook shot again in the paint by Chow Chi Wing and a basket by Patrick Tse (SOU #8) re-gained a six-point lead.

M.I.B. could climb back to 24-26, but Edward made another jumper, which was followed by a three-point basket from Patrick the three-point king. A turnover by M.I.B. was converted to a fastbreak lay-up by Arthur and Terence Chan (SOU #10) made both free throws as Tigers took a nine point cushion into the final stanza.

Patrick scored the first goal in the final period that stretched the Tigers’ lead to 37-26, but Tigers cooled off since then. Slowed steps and reduced stamina has led to poorer defense as the Tigers could sent the men in black to the line instead of really stopping them from scoring.

M.I.B. scored the team’s first six points all on free throws, where Dickson Chau (MIB #92)’s final one helped to cut the deficit to 32-37. After Chris and Benny each added a free throw in the tensed minutes, Arthur made a basket which put the Tigers up by seven points again.

Dickson made a buzzer beating three-pointer against Tigers last year which sent the game to overtime and made one that helped in the run two weeks ago as they beat SAMURAI, but he could not made one this time as M.I.B. was just short to come back in this 35-41 loss. Dickson was fouled at the buzzer but he missed both meaningless free throws.

Two  “League Tigers” were MIB forwards Adrian Chou (MIB #21) and Ben Cheng (MIB #7) and they are (defined as) men in black in the original four series. While Ben always skip this series in the fall, Adrian (out of town) had not yet dressed for M.I.B. for a game this year.

When Tigers was short-handed with real original players in last year’s Original Court, Arthur’s was invited when he took part in two Original Four games last year, included the overtime loss to M.I.B.. The shooting guard then joined MA YING to play in the Southorn Basketball League 2012.

Benny turned the ball over seven times, the rest of the team had eight.