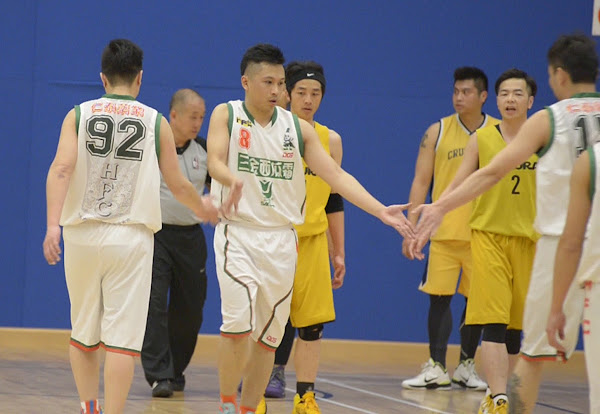 Jackie Lai (SOU #11) scored all his team-high nine points in the first period, when no other SAMURAI did score as they lead 9-6 at the end of the first ten minutes.

Trailing by three points into the second period, Patrick sparked H.F.C. by scoring the next four points in the game which helped H.F.C. to re-gain a lead. After a three-point play by Tabo Chak (HFC #92), Patrick completed the 9-0 run by his basket that gave the former champion a six point advantage in the middle of the second period.

H.F.C. extended the lead to nine points after Colin Wong (HFC #7) made two baskets as the second half begins.

New SAMURAI Lionel Gock (SAM #13) added a free throw and dished to Charles Wong (#23) for two points under the rim, and the Patrick from SAMURAI (Lai, #2) made two jumpers that cut the deficit to five again in the third period.

While H.F.C. cooled off during the 3rd period, Patrick Lai and Jefferson Tong (SAM #8) each scored two as SAMURAI was only down by two points through three periods.

After Patrick Lai’s two point cut it to 27-28, Patrick Ip finishes a three-point play that put H.F.C. back to a four-point lead. Jefferson missed both free throws could not help but SAMURAI couldn’t defend when Andy So (HFC #2) and Tabo each scored again for an eight-point lead that was kept until Charles’ basket made it a six-point game down the stretch. However, four more turnovers by SAMURAI in the next minute kept the team from really coming back.

Patrick Lai had eight points but no other SAMURAI score more than four. Lionel had a game-high ten rebounds. Jefferson hurt when he chase for an out-of-bound loose ball late in the game and did not return.

SAMURAI finished the game with three assists, in contrast to HFC’s 12 assists on 15 field goals. H.F.C. improves to 5-2 against SAMURAI in all HOOPS games.

Ben Yu (HFC #11) returned to action again, he played in his only game in 2012 after he missed six games since HFC won the 3-rd place game at Southorn Stadium.