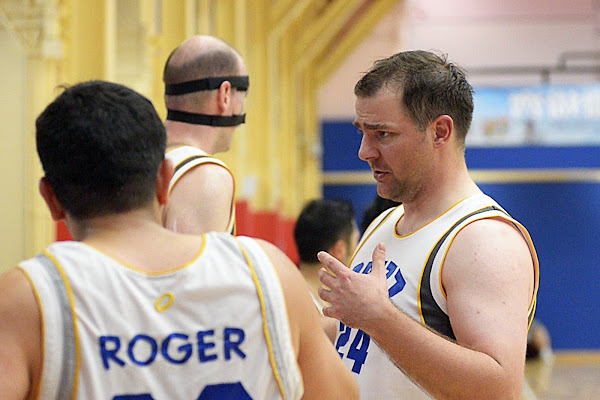 GRIZZ beat short-handed Tigers 43-28 on Sunday behind 15 points from Tony Chow (GRI #11) and split their first two games in 2013 this year. Droste Stefan (GRI #24) was two points shy for a double-double with eights points and eleven boards.

Patrick Tse (SOU #8) completed a three-point play and Cindy Lee (SOU #17) made a three-point shot as Tigers jumped to a 6-0 lead as SOUTHORN Tigers played in their season debut. Patrick made another running shot before the end of the first period when Tigers still had a 8-4 lead.

The lack of depth by Tigers was soon revealed in just the next period.

Mak Chin Yi (#88), the only other active female player in the League, faked and scored off the glass against Roger Mahmud (GRI #32), but facing a bunch of guys that most doubled her size is obviously not an advantage. The basket was the only points Tigers could score, and Droste Stefan capped a 10-to-two run by making both free throws as GRIZZ entered the second half with a 4-point lead.

After Benny Wong (SOU #7) cut the lead to one only by a three-point basket, Roger made basket and Tony Chow (GRI #11) followed his own free throw by a three-point basket that extended GRIZZ’s lead to seven points. He hit from deep again and Jonathan Lee (GRI #15) scored four of his six points that end the 3rd period with a 11-point advantage.

Stephen Tsang (SOU #23) finally scored for the Tigers in the final period, when his jumper reduce the deficit to single digital again. Only Tony made his 3rd trey in the game and extended the lead to 12 points.

Benny split a pair of technical free throw and made a three point shot that cut the deficit again to eight, but seeing Wilson Chow (SOU #9), the only big in red, sitting at court side with four fouls, Droste Stefan (GRI #24) find little obstacle against the (well) under-sized Tigers and scored another easy two points.

Terence Chan (SOU #10) missed all kind of shots in the game, including four field goals and free throws apiece. Usual starters Chow Chi Wing (SOU #21) and Edward Fong (SOU #1) did not play. Dennis Chang and Ben Cheng (SOU #33) were also not available for the game, when Tigers started Cindy at shooting guard. Ken Leung (SOU #14) will miss the season after he got a torn ACL last September.

SOUTHORN Tigers, which had ten steals in this game, was out-rebounded 38-21 and allowed 13 offensive boards.

GRIZZ improved to 6-0 against the Tigers.