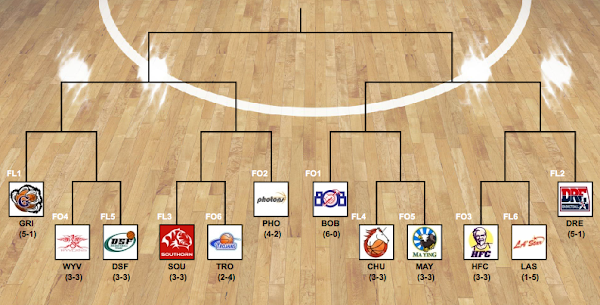 All three new teams this season advanced, and the Southorn Basketball League Play-Offs 2011 will begin on Sunday at Smithfield Sports Centre.

Two of the losses by the young Chung Sing were in over-time and their only other loss is by two points only. However, in only their second trip to the playoffs in four seasons, MA YING, the 1st Runner-Up last year, is their first opponent. Despite three former T-REX on the team, MA YING went through a roller-coaster season due to inconsistency, both on performances and roster.

Wyverns was even after 6 division games, both in terms of victories (3-3) and points (209-209). The new team topped MAY and TRO for standings to rank 4th and will begin the play-offs against D.S.F. which won three games in a row. Only Dream Team and B.O.B. has a better streak.

History tell us Trojans is six-to-nothing against SOUTHORN Tigers and the men of troy did eliminated the Tigers twice in first-round play-off match-ups. The Tigers only became older but Trojans might not have been better since the two-time and defending champion got only two victories this season and lost two in a row for the first time since 2008.

H.F.C. lost in a close-fight in their last division game and fell to third but they look to bounce in the first round when LA Star, the team with only one victory over the eliminated SAMURAI. While LA Star may be the underdog, but one should note LA Star was one of the only two teams not named GRIZZ to have a second-half six-point lead against Dream Team.